All Aboard Lionel’s Snoopy Railroad! Getting in Touch with Virginia’s Nature

Why I am Breaking Up with Merrick Pet Care

I’ve gone back and forth about whether I should address the acquisition of Merrick Pet Care by Nestle Purina because it breaks my heart to even think about it. I wanted to allow for some time to pass before I addressed my feelings super publicly in case I changed my mind or I found out it was just a big joke.

But, in the end it wasn’t a joke and my feelings haven’t changed. For me, this is just too important not to address. 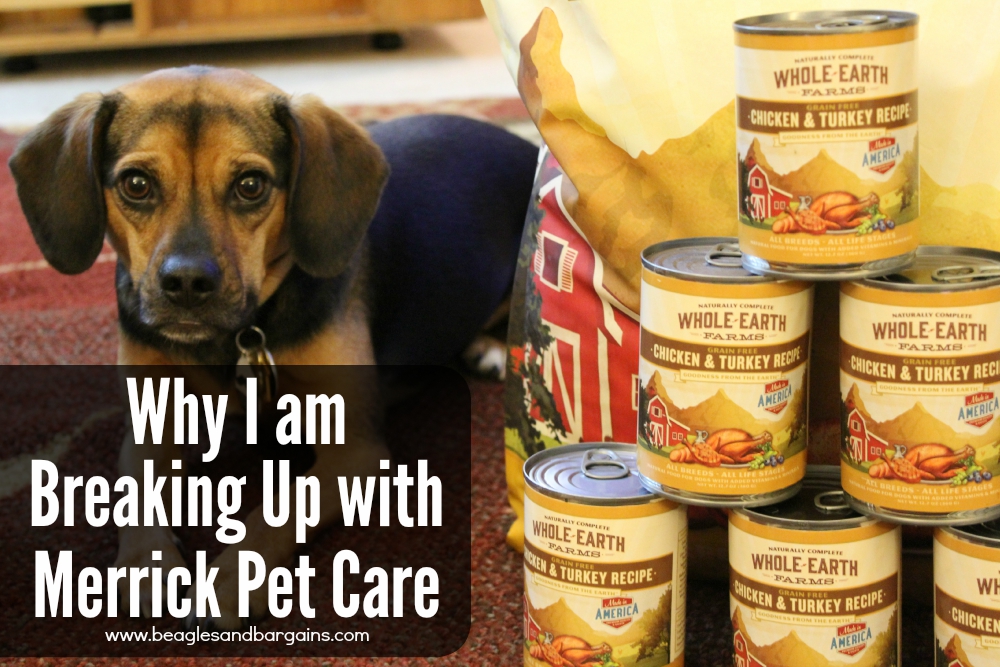 For the past year and a half, I’ve had a great relationship with Merrick through various product reviews and giveaways right here on Beagles & Bargains. I have especially loved visiting their booth at the Global Pet Expo and BlogPaws to speak with their communication team and learn all about their latest products and how they are currently giving back to the pet community. It has been an amazing experience and so, I think it is appropriate to provide an explanation for why the relationship is coming to an end.

If you have been following Beagles & Bargains for a while, you know that we have been pretty big Merrick fans since I first learned about the brand back in early 2014. Since then Luna has been regularly eating and enjoying Merrick food and treats and I have felt great about it.

I have loved Merrick because they have offered a wide variety of products at different price points. Merrick has also provided many kibble options for dogs with dietary restrictions. Even their lowest tier, Whole Earth Farms, was a great option for those on a budget and was what I fed Luna regularly.

My stance on all of that hasn’t changed. I still think Merrick Pet Care provides quality kibble options for pet parents who are working within a tight budget. And despite the acquisition, both Merrick and Purina indicate that Merrick will continue to operate independently in their kitchens in Texas. I sincerely hope that means nothing at all will change, but I don’t know what the future holds and that scares me a lot.

But, my decision isn’t just about being scared of the future. It’s because one of the very core reasons I supported Merrick Pet Care has now been taken away.

I supported Merrick because it wasn’t Purina. It wasn’t a part of a giant corporation where the bottom line was all that really mattered.

Merrick has always been a business in the market of making money and a corporation on its own, but for me it was small enough that I felt a connection. I felt that Merrick really cared about me and about all the pets eating their food. I was confident that I could trust Merrick with the most important thing in my life – the health and welfare of Luna.

Nestle has had a controversial history full of sketchy practices. Don’t believe me? Check out the whole section on Wikipedia dedicated to the issues. Many of these conflicts were before my time for sure, but I believe that anything built on a rocky foundation can’t be stable in the end.

Then there are all the legal issues that have come up around Purina and Beneful in recent years. If there are known health issues with a product, I absolutely can’t understand why a company wouldn’t address the issues, improve the recipe, and even take it off the shelf until it is safe and healthy for pets consuming it. It puzzles me even more when the company claims to care about the welfare and health of pets using their products. But then again fixing problems costs money, which doesn’t help the bottom line.

But Purina donates to animal shelters all the time, so they definitely care about animal welfare, right?

Maybe, but it’s a sad truth that donating a product they are already producing costs a whole lot less than taking one of their top sellers off the shelf and investing time and resources into improving the quality of the recipe. So they can save face without really addressing the issue.

Plus, when Purina donates to an animal shelter, it familiarizes the shelter with their brand and may even create a bit of a dependency from the shelter. It makes it very likely that newly adopted pets will eat their kibble even once they go home, gaining them customers for life. Before I first brought Luna home, I asked her rescue group what she was eating and for their recommendations. I don’t think I’m alone.

I find it hard to believe that a company who has their hand in baby food, candy, ice cream, and frozen pizza could really know what’s best for my dog to eat anyway. Or how a Swiss company could do justice to a brand which prides themselves on being USA made. And, that’s why I prefer to support smaller companies who know their product and their customers inside and out.

I am absolutely not trying to offend anyone who uses Purina or even discourage anyone from feeding Purina or Merrick to their pets in the future. This is to share my opinions and my thoughts. This is to encourage you to think about what you are feeding your pets and what companies you are supporting with your money. This is about education and conversation. Absolutely make the best decision for you and your situation. I won’t judge you or love you any less for it.

Purina provides tons of extremely valuable jobs that I’m thankful for. Purina also employs many pet nutritionists and researchers, so I like to think that means they are moving in the right direction. That they are starting change by improving their premium kibble lines and bringing in others like Merrick.

It can’t stop there. I challenge Purina to tackle all of their lines, but especially their more budget friendly ones. Remember that a bargain isn’t a bargain if the quality isn’t there.

In the end, for personal and moral reasons I am unable to support Nestle or Purina either financially or through Beagles & Bargains. As a result, I am saddened to say that this is the end of my relationship with Merrick Pet Care.

So what does that mean moving forward?

I won’t be throwing away any Merrick products that currently sit in Luna’s pantry. Instead we will be using them until they run out. Later this fall, we will be exploring different kibble options that provide quality, but that don’t cost an arm and a leg.