Dogs at Play – 10 Safety Tips for Dog Toys Summer is here and so is The Super Sized Pet Blogger Summer Giveaway!

A Weekend on the W&OD Trail in Virginia

Last week’s weather was quite rainy, so we were stuck inside most of the time. Fortunately, last weekend the rain stayed away and my boyfriend and I had the opportunity to take Luna on the W&OD Trail on both Saturday and Sunday.

The W&OD trail is known as the skinniest park in Virginia at only 100 feet wide, but it is also one of the longest with 45+ miles of paved trail for walking, running, biking, and even skating. The park also includes 32 miles of gravel trail for horseback riding. The trail runs from Shirlington to Purcellville, both of which have a variety of pet friendly options.

The trail is built on the roadbed of its namesake, the former Washington & Old Dominion Railroad. Because of this connection there are also numerous spots to stop a learn a bit of history.

We don’t live far from a trail head in Vienna, Virginia, so on Saturday we packed into the car and drove to it. We walked for about 3 miles down to downtown Vienna and back. We stopped for a few photos along the way and even discovered a new brewery to check out.

Since the W&OD trail is paved, I paid special attention to keep Luna just off the side in the grass to protect her paws. Don’t forget that as the weather heats up, so does the pavement! If you wouldn’t walk barefoot, then your dog shouldn’t either.

We saw tons of beautiful flowers and greenery along the trail. I guess all that rain helped with something! 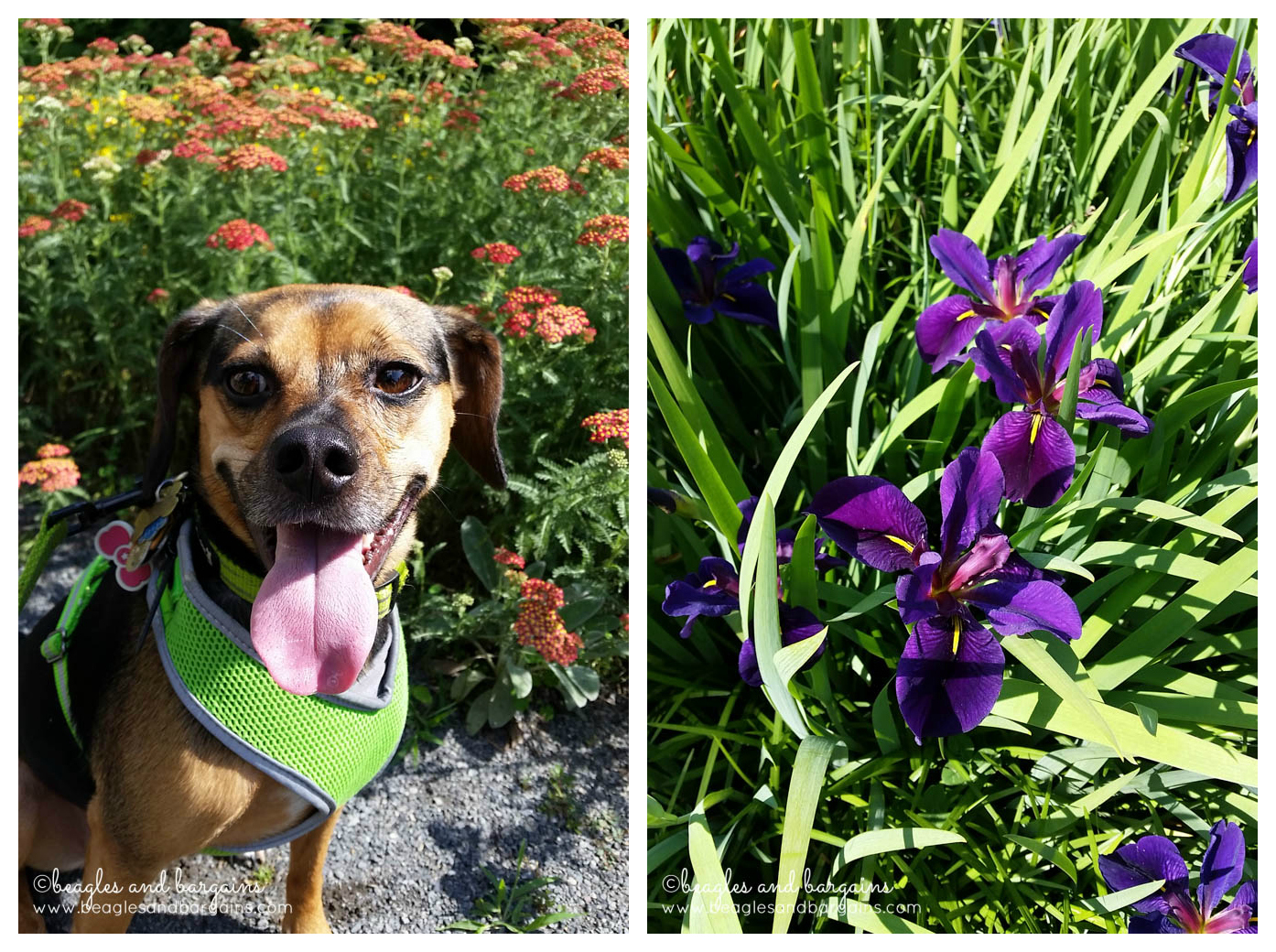 In Downtown Vienna, we stopped by the Vienna Caboose and a mural with what else but running dogs! 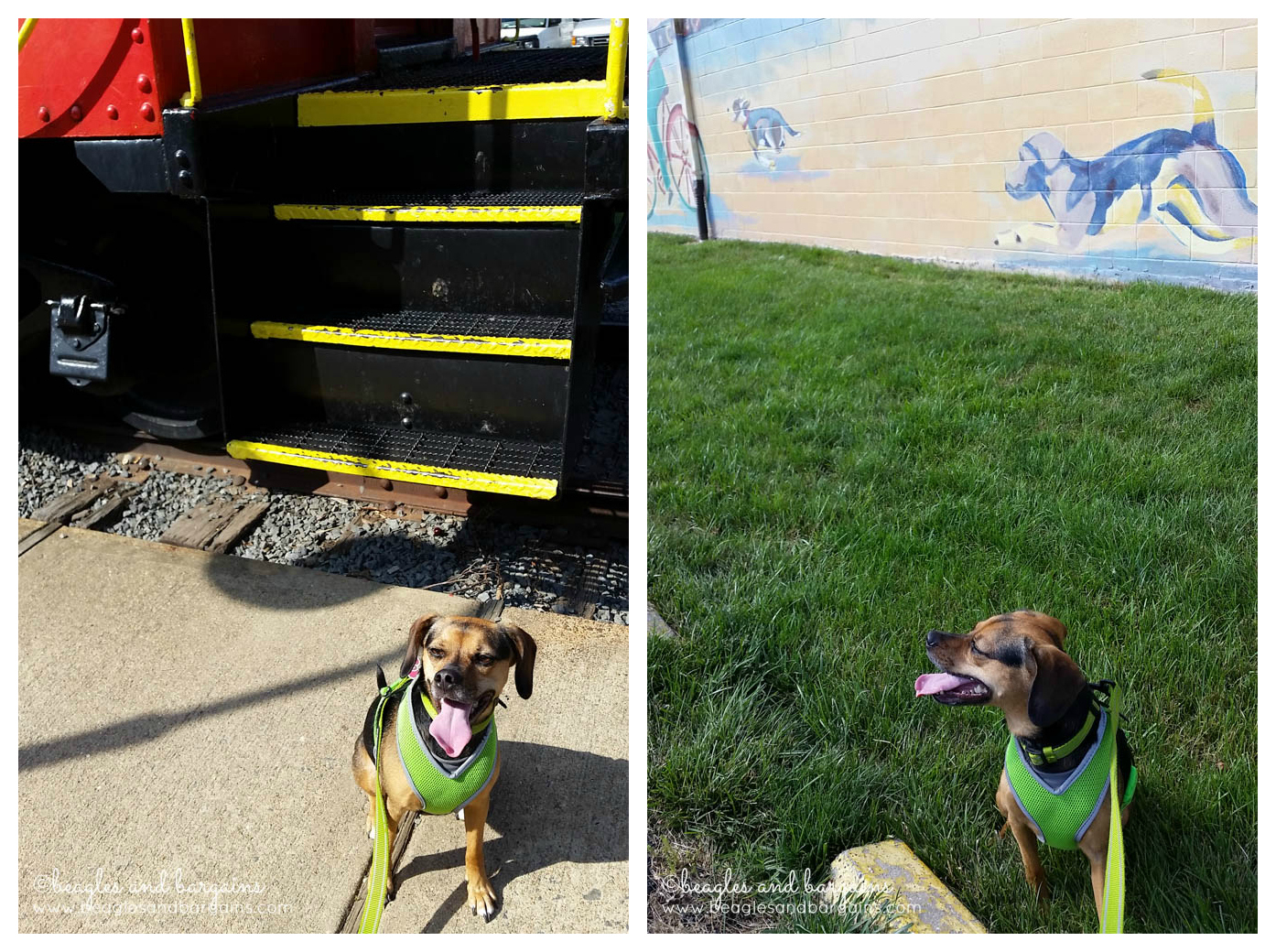 Since the weather was pretty warm, we took several water breaks. Luna took even attempted to cool off by rolling in the grass (and some other plants). 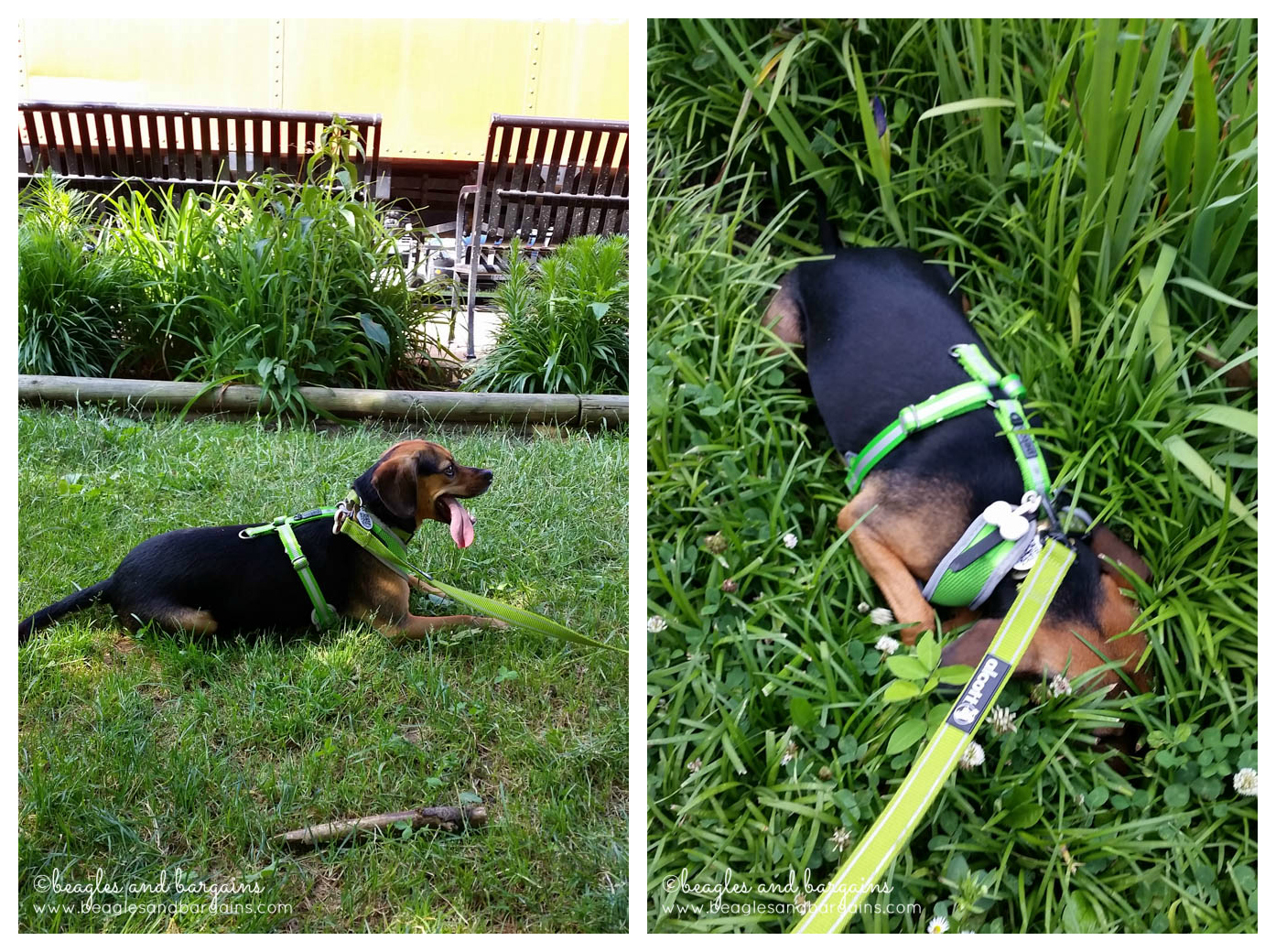 On Sunday, we got back on the trail, but this time we took our bikes. I was thrilled to finally put our Solvit HoundAbout Bike Trailer to the test and bring Luna along for the ride. I conned my boyfriend into towing her. What’s an extra 25+ lbs of dead weight anyway? 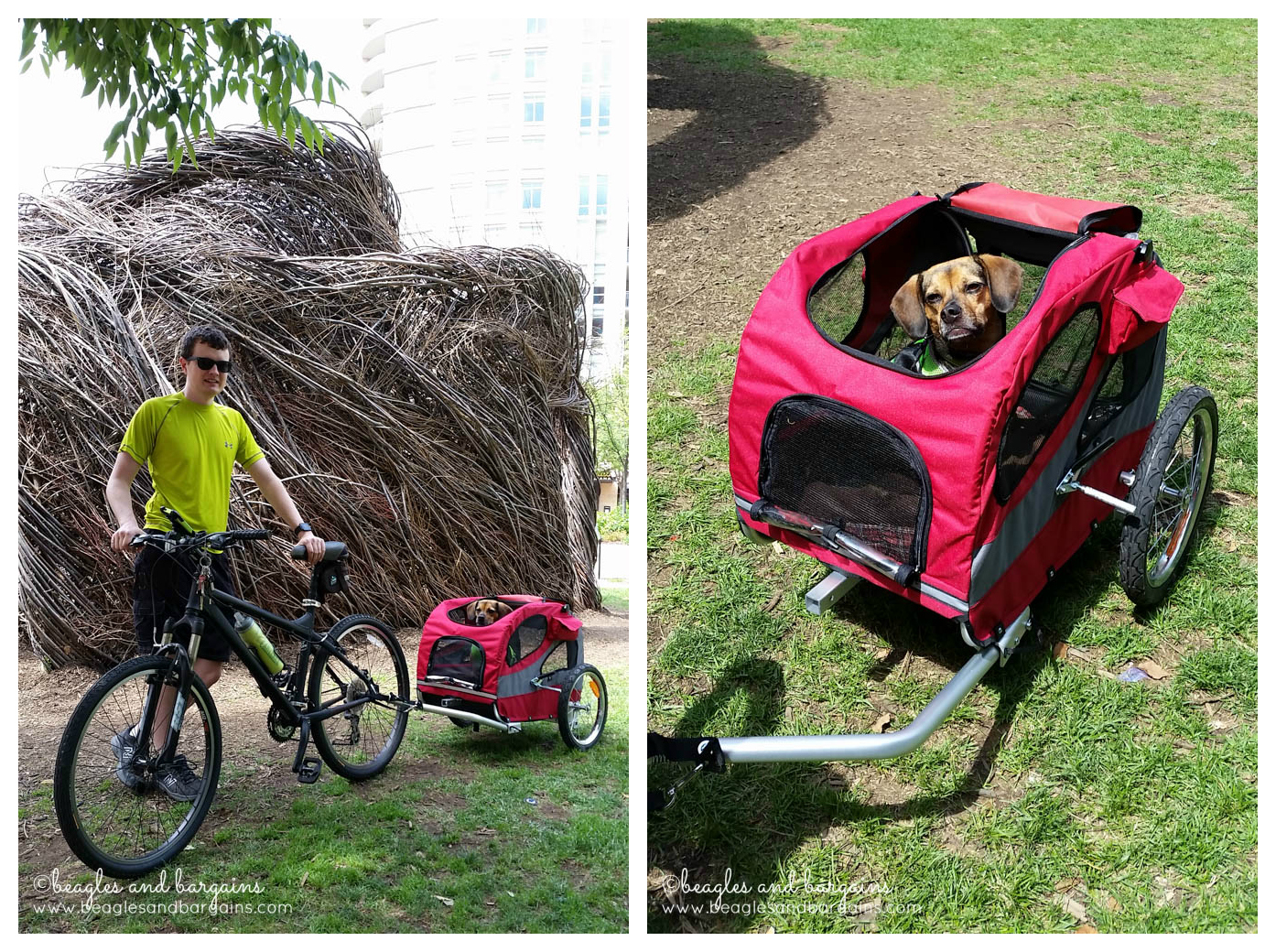 We rode 15+ miles round trip all the way to the Reston Town Center where we stopped to rest up and enjoy some refreshing drinks. Luna even got a giant sized Puppuccino from Starbucks. The Barista didn’t know what a Puppuccino was, so he gave us a Tall cup of whipped cream instead of the mini ones! 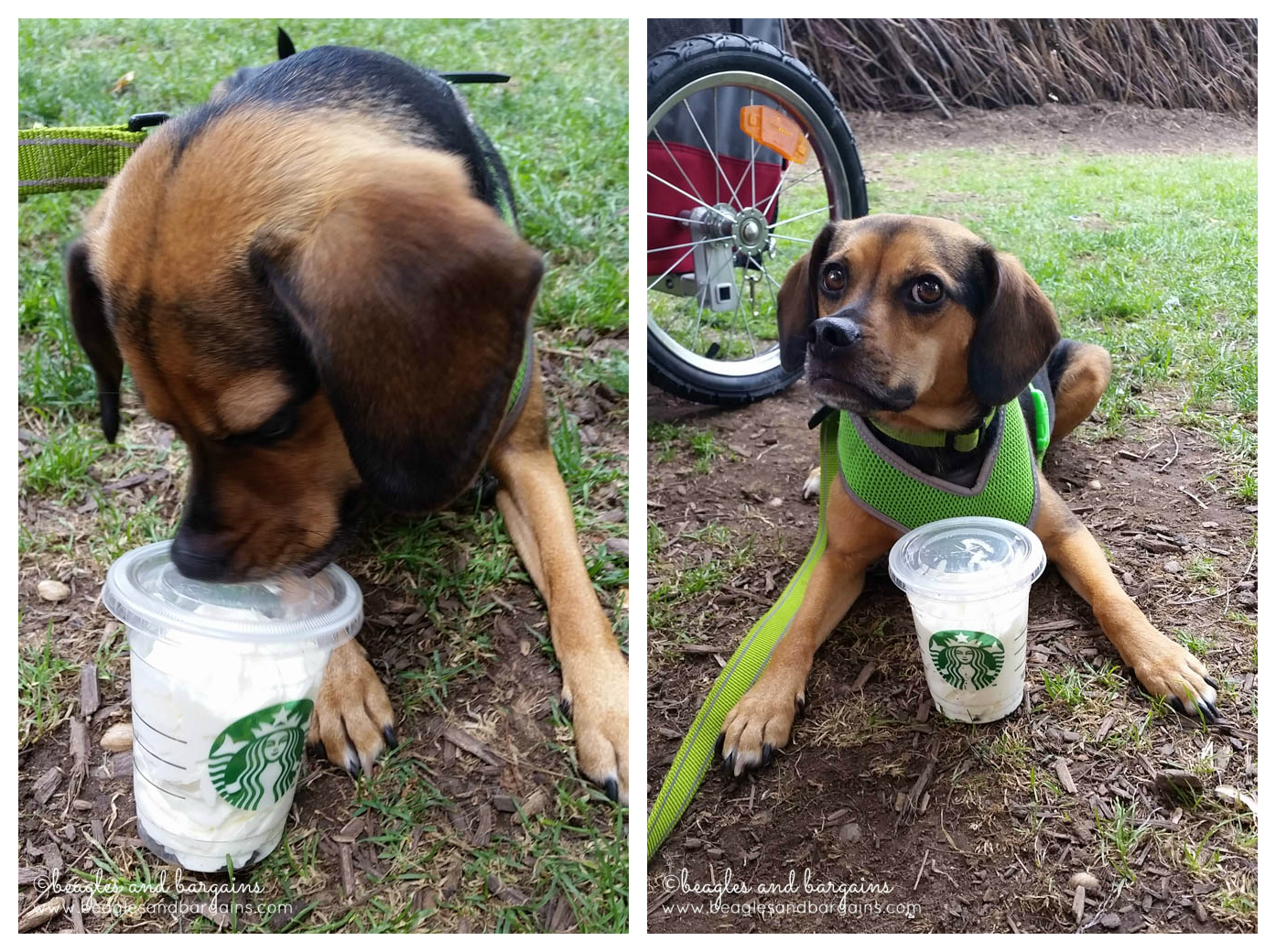 As you can see Luna didn’t mind the extra one bit. In fact, she was left asking for even more whipped cream! Maybe that’s because I stole some for myself too. 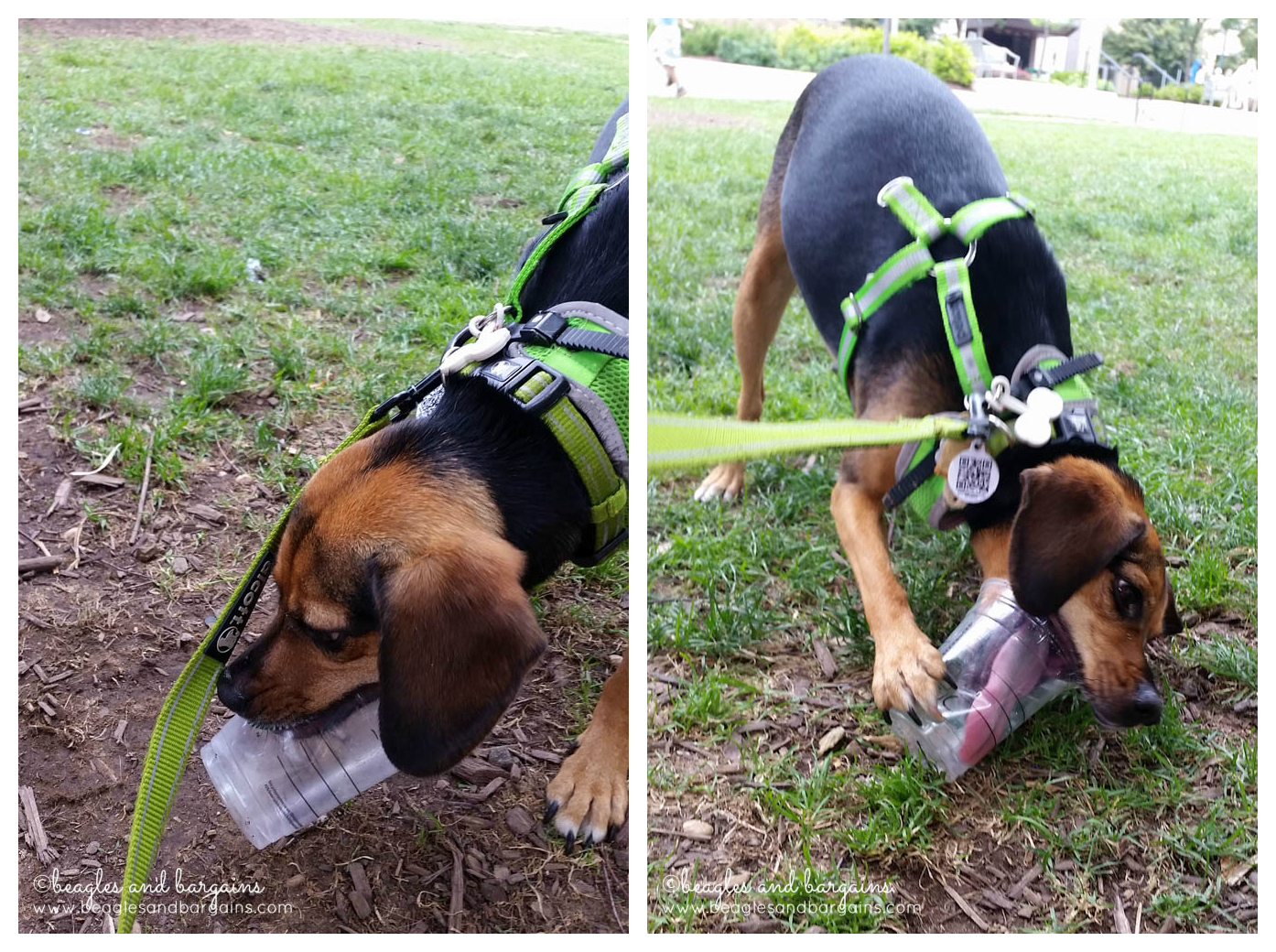 Before we got back on the trail, we admired a unique sculpture in the Reston Town Center which was a house made out of sticks and twigs. They were all twisted into place and it didn’t seem like any adhesive or nails were even used! 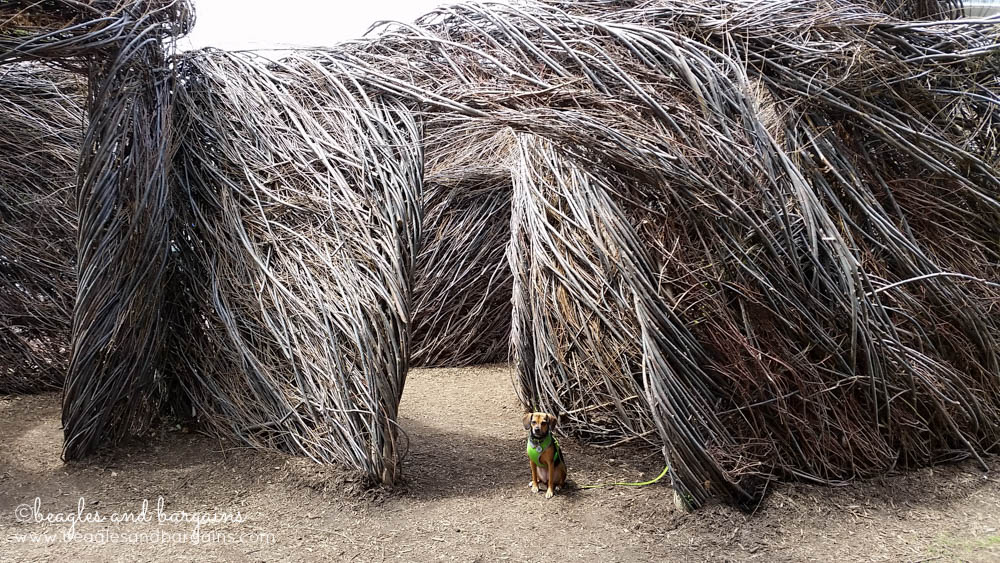 Where is your favorite place to take your dog on the weekend?