Why I Stood Up Against GoDaddy’s Super Bowl Commercial #NoDaddy 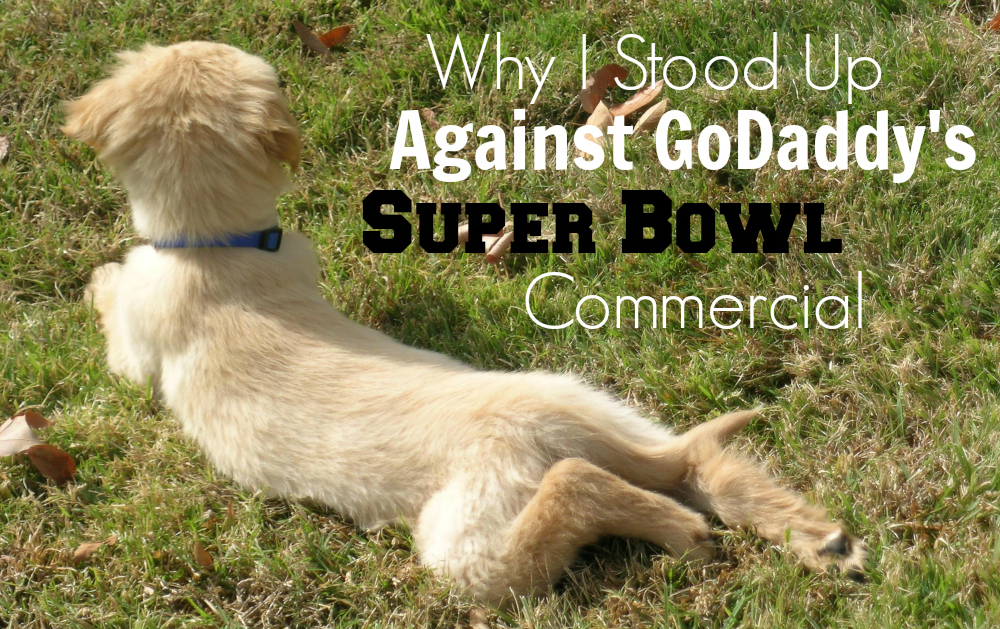 Initially today I had planned to just share a few fun photos of us gearing up for the Super Bowl this weekend, which I will still post a bit later. However, I couldn’t leave my posts for today at just that because I really wanted to address something that blew up the internet yesterday.

Yesterday morning GoDaddy, a web hosting provider, previewed their Super Bowl commercial via the Today Show. The gist of the commercial was that a golden retriever puppy, Buddy, is separated from his family and has to make the “Journey Home.” The commercial itself was designed to poke fun at Budweiser. However, the commercial ends in a controversial twist where as soon as Buddy returns home the owner says “Look! It’s Buddy! I’m so glad you made it home because I just sold you on this website I built with GoDaddy.” Then the commercial ends with a shot of Buddy in the van whimpering as the woman says “Ship ’em out!”

GoDaddy has since pulled the commercial from airing and taken the video offline.

The commercial was pulled because of a cry of outrage from animal activists, pet lovers, animal rescues, respectable breeders, and pet parents on Twitter because the commercial appeared to be supporting puppy mills and online sales of animals as if they were just a pair of shoes. You can find some evidence of the backlash by following hashtags such as #NoDaddy and #GoDaddyPuppy.

I actively took part in this conversation on Twitter and I am going to share why. I found it easy to express my anger and disappointment on Twitter, but a bit challenging to really address the issue at hand in just 140 characters, so I want to address it here.

During the discussion yesterday, I tweeted with GoDaddy (@GoDaddy), Blake Irving CEO of GoDaddy (@Blakei), and various other people who were also engaged in the conversation.

The GoDaddy Super Bowl commercial upset me for two reasons:
1. It appeared supportive of puppy mills.
2. GoDaddy’s initial response to the negative reaction was defensive and conflicting.

I’ll start by addressing #2. I was initially told that Buddy was ADOPTED, then I was told that he was PURCHASED. Although I will always choose to rescue, I personally don’t have a problem with reputable breeders and I do believe that they exist. (If you don’t, I would kindly appreciate that you not start that discussion here because it isn’t the place.) However saying that, I do believe there is a difference between ADOPTING and PURCHASING a dog.

Additionally, I was also reassured that GoDaddy does in fact support animal rescue through donations. That is wonderful, but does that mean the message in the commercial should be forgiven? Would I forgive someone who ran a puppy mill and treated their dogs terribly, but also occasionally donated to animal rescue? Probably not. Now I know that is not the same thing as what GoDaddy did, but the commercial was set to present the idea that buying and selling an animal completely online is okay in an extremely public way. To me that is one step backwards in the fight to stop puppy mills.

So how did the commercial appear to support puppy mills and the online sale of dogs?

1. Reputable breeders do not sell online. Yes, they might (and probably should) have an online presence, but the transaction will not occur completely online. There are a lot of factors to consider. Will the new owners be responsible? Is this dog the right fit? The thought that a dog would exchange hands sight unseen is completely terrifying. Who knows where he or she will end up? Who knows what the conditions were where he or she came from?

@Blakei No reputable breeder sells online. Period. They have websites, but do not sell puppies to strangers on websites or in FaceBook.

@beaglesbargains @Blakei amen!!! My breeder still checks in with me every week to see how I'm doing! He's my #bff

I am proud to be a part of a community of individuals who aren’t afraid to speak up for what is right. I am also happy to see that GoDaddy has listened to the response and decided to pull the advertisement from airing during the Super Bowl. However, GoDaddy has a lot of work to do to earn back the trust from the animal loving community and I can certainly say that they will not be getting any business from me anytime soon.

If you are interested in reading more about this controversy, I would suggest:
When Advertisers Ads Go Bad A Community Comes Together by Carma Poodale
6 Reasons Why GoDaddy’s Super Bowl Puppy Commercial is Heartbreakingly Awful by Reel Life with Jane
The GoDaddy Puppy Commercial: Nightmare marketing idea or PR stunt? by DOGthusiast