Wow. I can’t believe it’s already been over 6 months since we completed our 17 day coast to coast road trip! Since it’s finally a new year, I think it might be time to share photos from the last leg of our journey – going back home.

Unfortunately due to time constraints and limited vacation days, we didn’t have the luxury of stopping as often on the way back. Instead of just driving 6-8 hours each day, we had to manage 11 or more. That didn’t stop us from enjoying some great sites and A LOT of the World’s Biggest attractions. 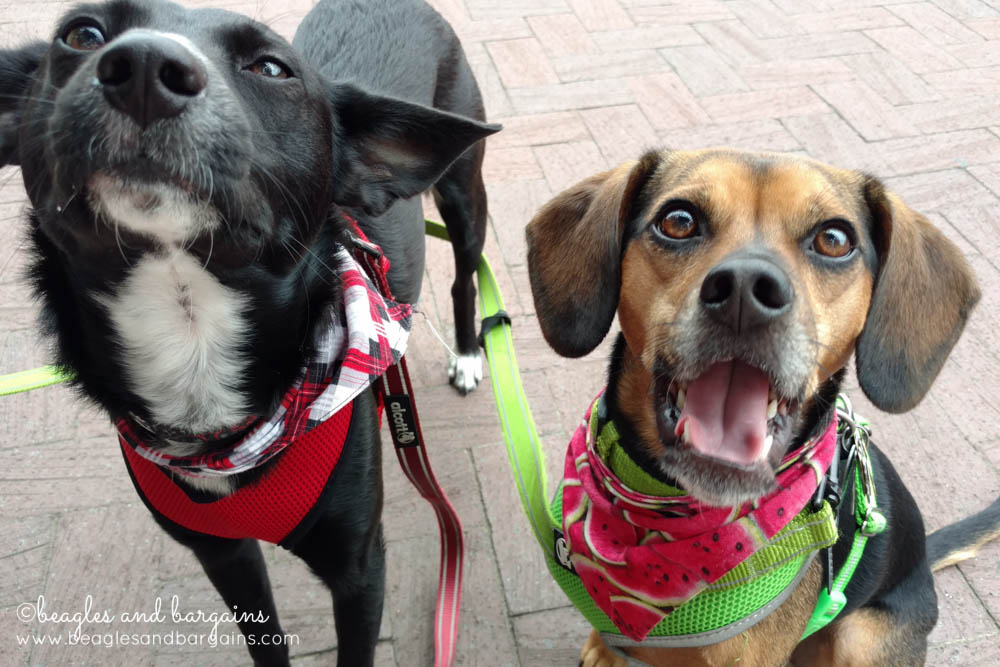 We started the last part of our journey in Los Angeles, California where we had been staying for a few days and visiting family. Then we headed east to Albuquerque, which was about a 12 hour drive! We didn’t get an early start in the morning because we were still visiting with family, so that meant we didn’t have much time to stop other than for gas and potty breaks.

The highlight of that day was actually stopping at a truck stop when we were starving and going to the Wendy’s. I don’t think I’ve ever had a more satisfying meal in my whole life. My boyfriend refuses to go to Wendy’s STILL because it will ruin the memory. It’s funny how being hungry can make regular food taste so good. The dog’s probably got a few fries too, but shhh… don’t tell. Truck stops are great options when you are traveling. Even though it was practically in the middle of the desert, they still had a patch of grass for dog bathroom breaks and the human bathrooms were so clean and maintained! 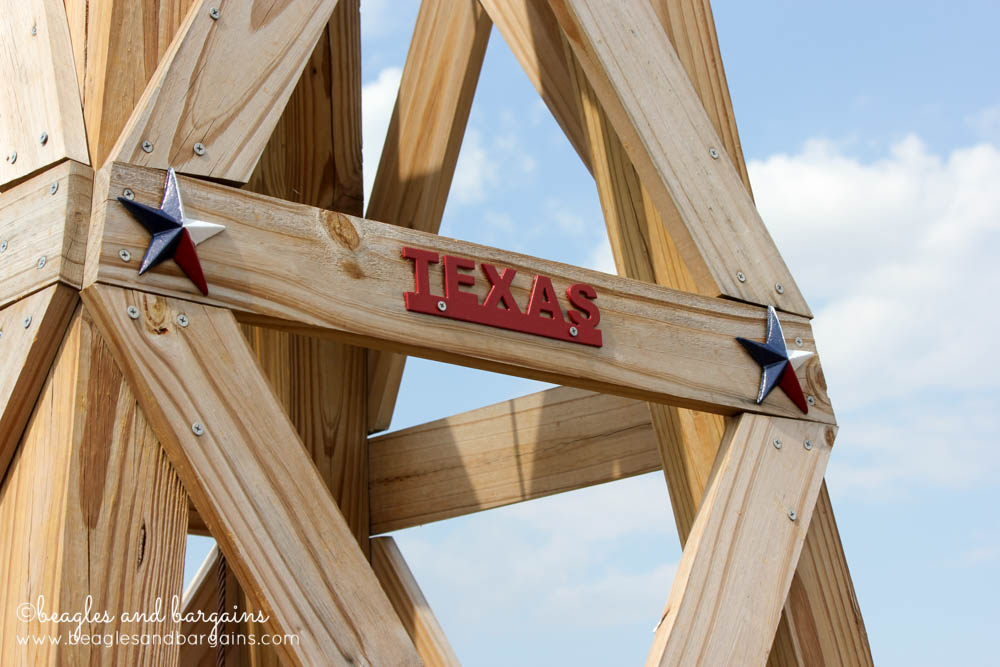 The next morning we left Albuquerque to head to Joplin, Missouri. We decided to take the northern route on the way back and follow Route 66 all the way to St.Louis, MO rather than taking I-40 all the way back east. My family is from Missouri and Luna had already taken a few road trips there for previous family gatherings, but neither Ralph or my boyfriend had been there before. Plus, changing up the route gave us an opportunity to go through more states and see more of the World’s Largest everything. 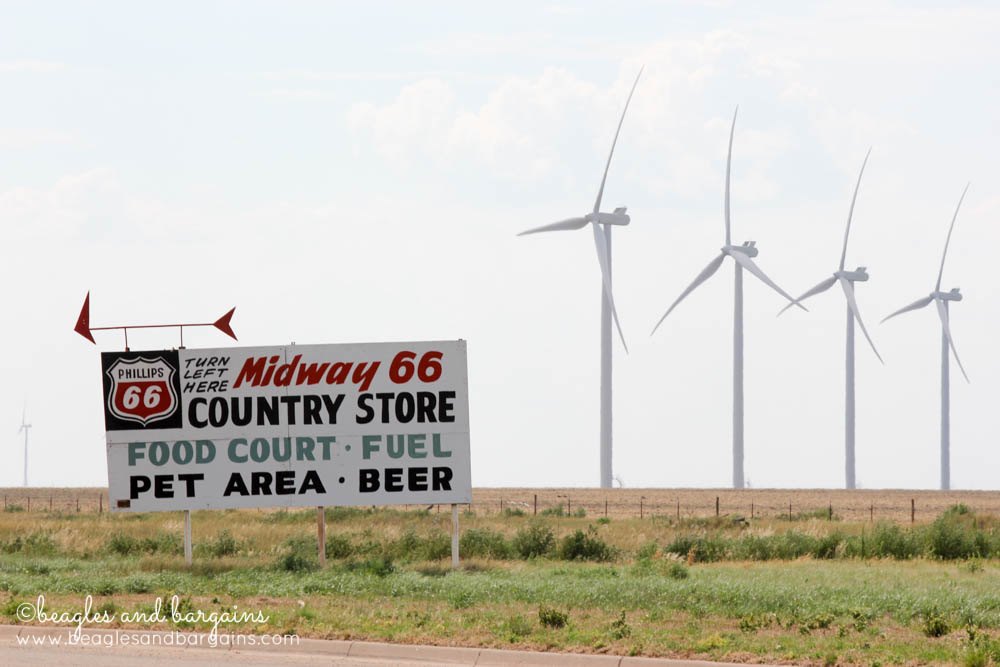 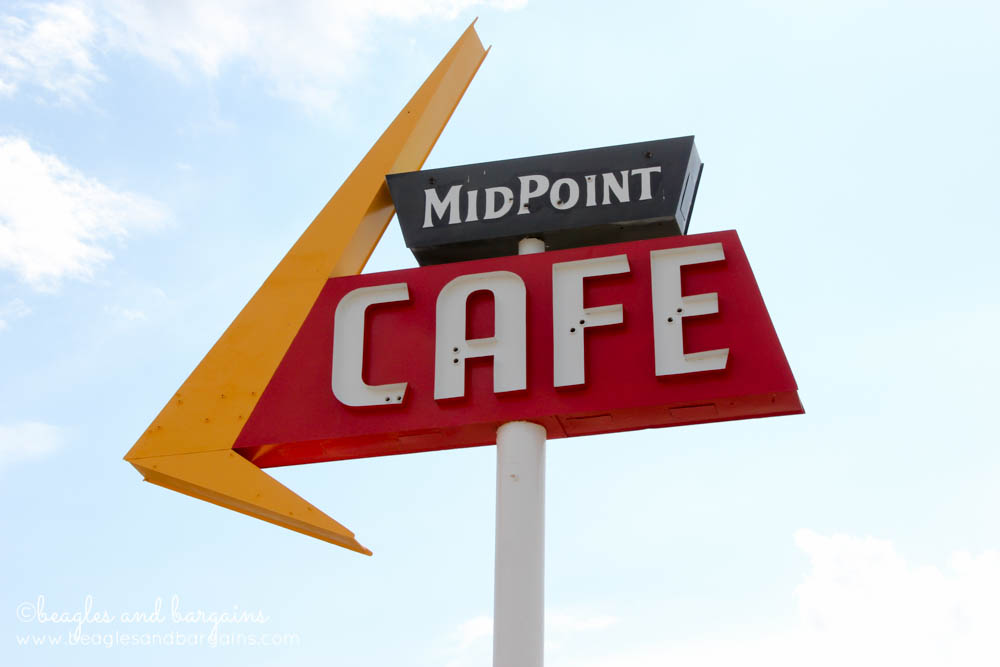 On this day we started in New Mexico and then drove through parts of both Texas and Oklahoma before getting to Southwest Missouri. We stayed on I-40 most of the way, which is the interstate that has replaced Route 66 in the Southwest. In Texas, we did get off to take part of historic Route 66 to see the MidPoint Cafe and the small town of Adrian, which was an inspiration for Disney Pixar movie Cars. 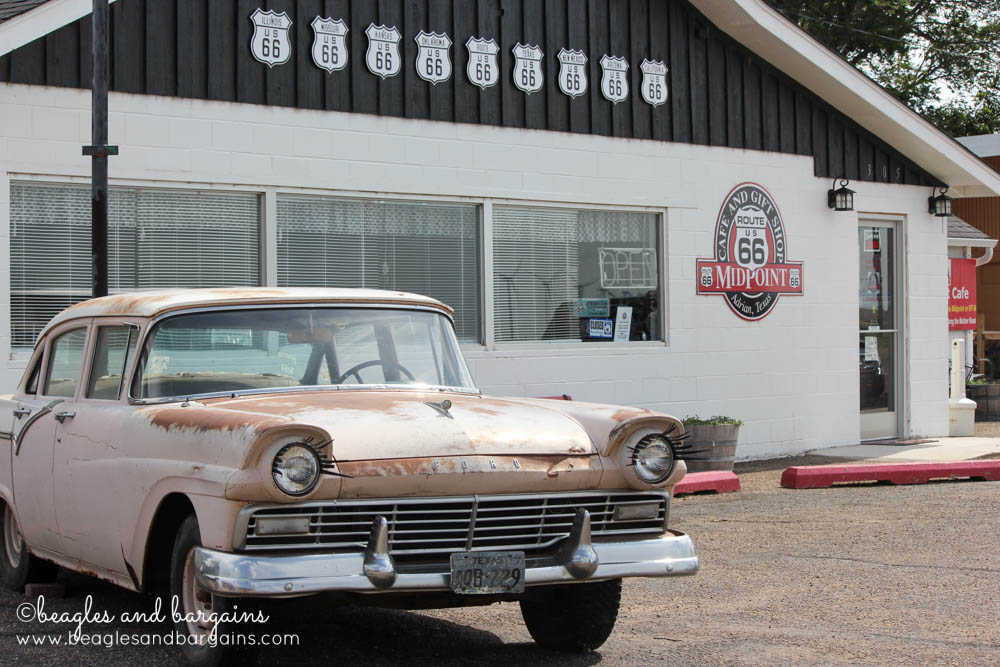 It wasn’t too busy and unfortunately the MidPoint Cafe was already closed for the day, but it was fun to see the marker for the midpoint of Route 66, which is halfway between Chicago and Los Angeles. 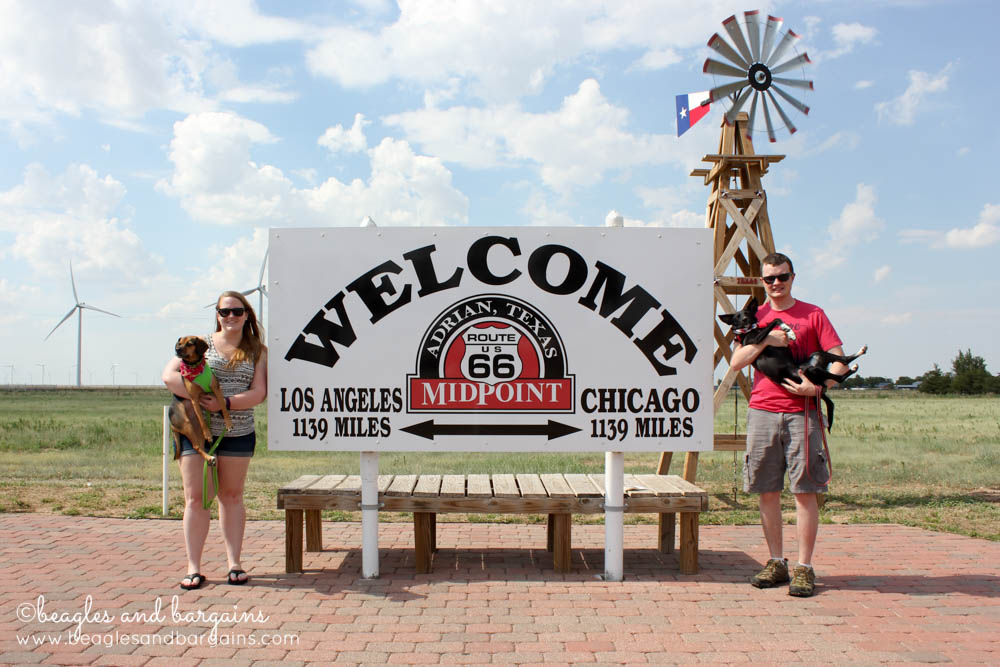 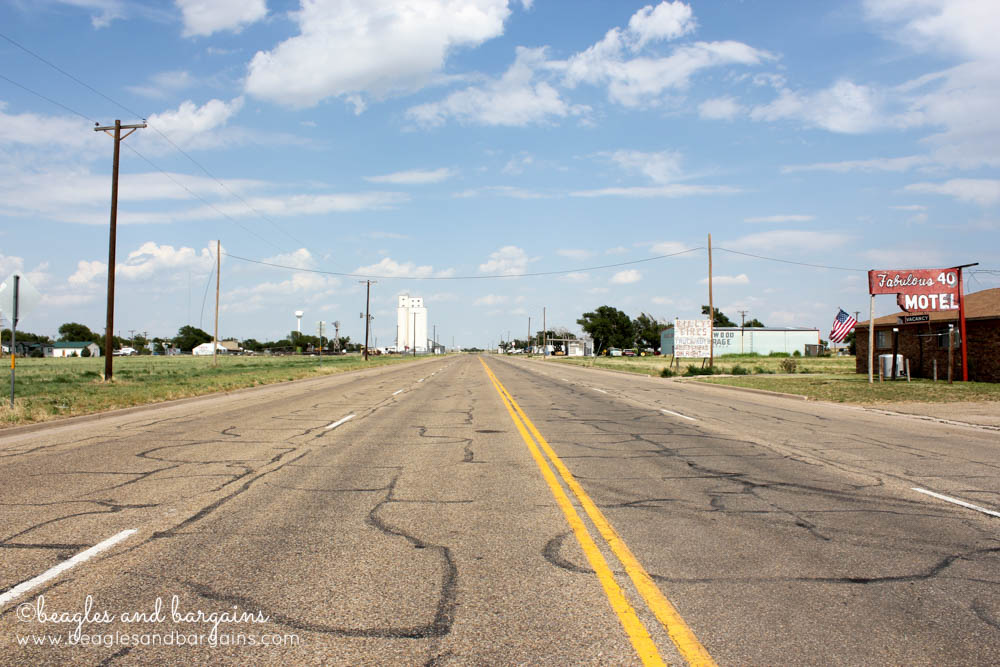 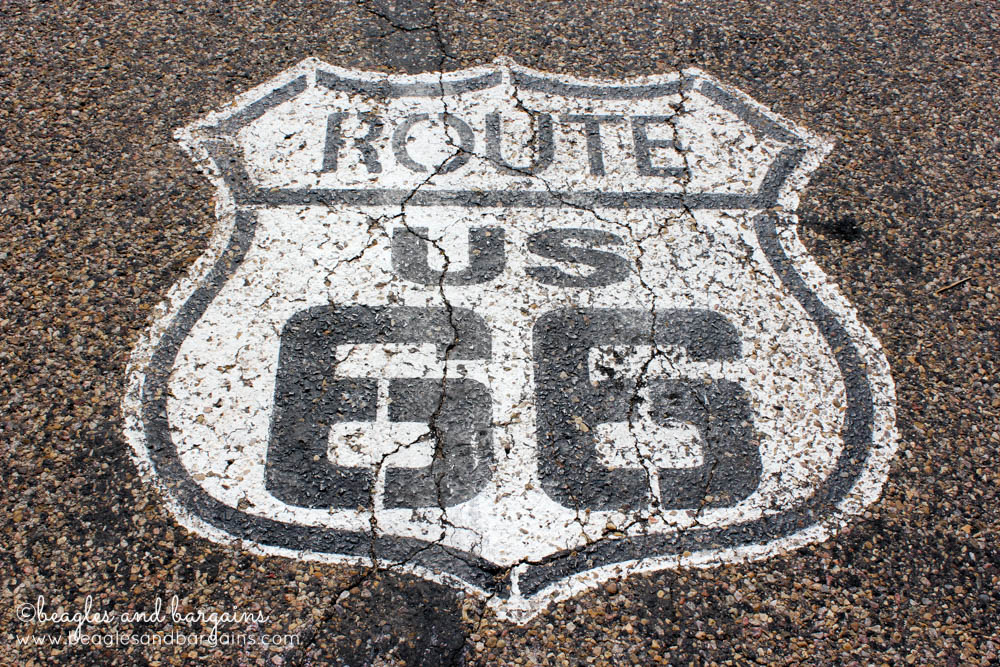 They even played up the Cars movie reference and had a real Mater you could take pictures with. 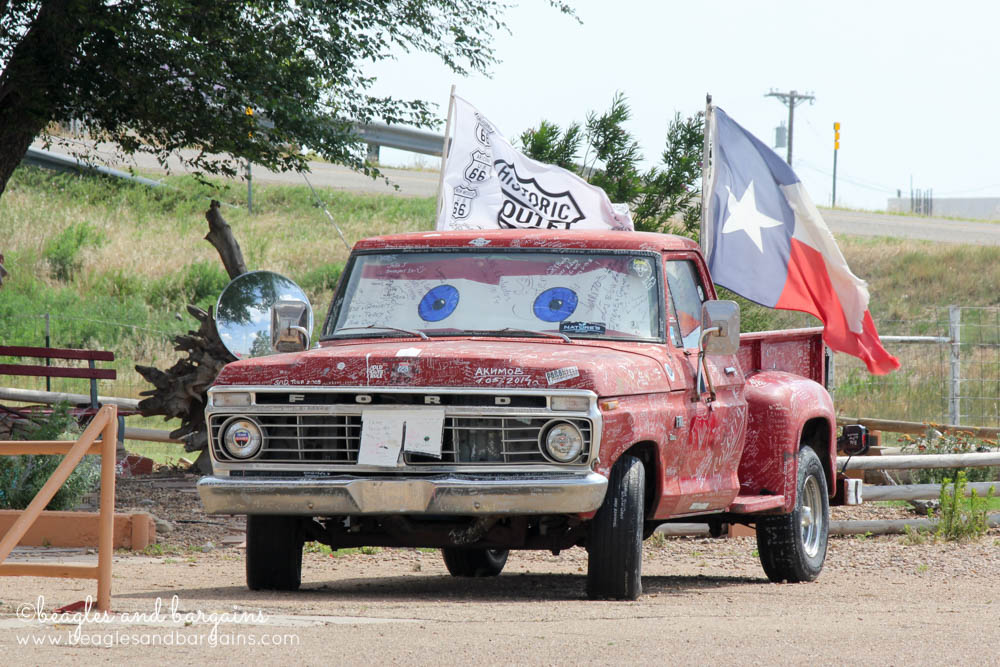 Shortly thereafter, we passed the Leaning Water Tower of Groom, TX which we had seen on the way out west. The story is that someone made a bet that a water tower wouldn’t stay up if it was leaning, so the other person went ahead and built it. Obviously, they lost the bet because there it stands.

Most of our drive through Oklahoma was after dark, so we didn’t stop as much. Though we did catch a glimpse of the World’s Largest Route 66 Sign, which is part of the Route 66 Museum in Elk City, Oklahoma. 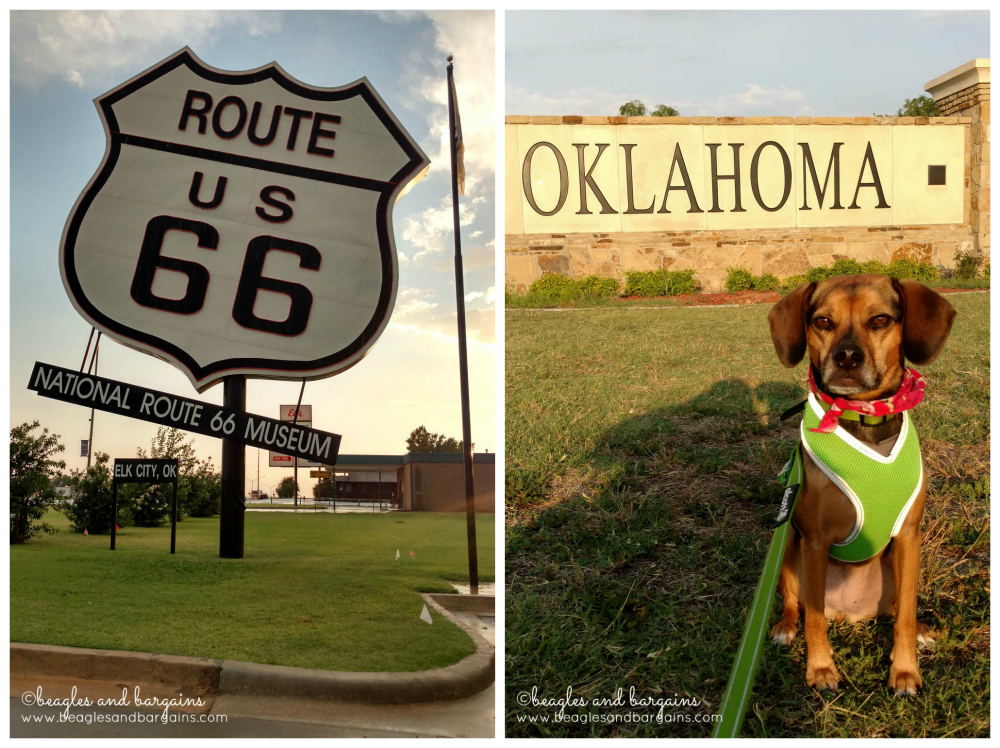 We also visited an exciting Sonic Drive-In for a tasty treat and saw the World’s Largest McDonald’s. (I did tell you that we were trying to see the World’s Largest everything…) This McDonald’s is in Vinita, OK and it straddles I-44, which heads north to Missouri. I really wish we had been able to get a picture!

Once in Joplin, we were ready for a good night’s sleep! The next morning we snapped a quick picture in front of the sign and then headed Northeast on Route 66 towards St. Louis. 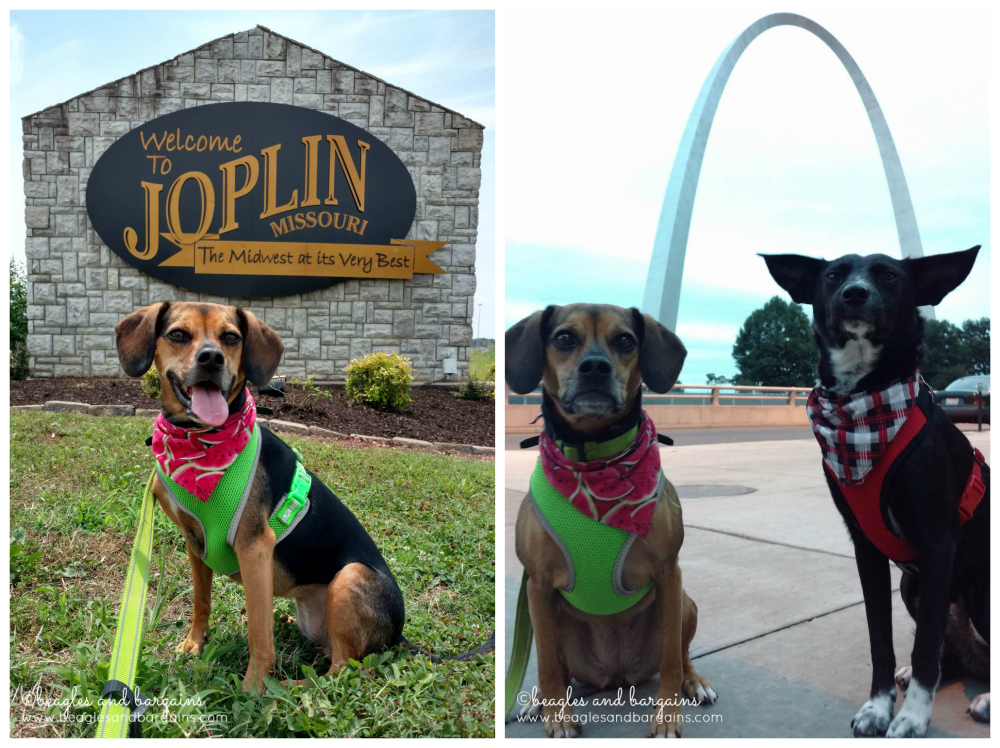 On the way there, we stopped in Springfield, MO to see the World’s Largest Fork. Try eating a salad with that! It was a little rainy when we stopped, but it was a great opportunity for us to all stretch our legs. 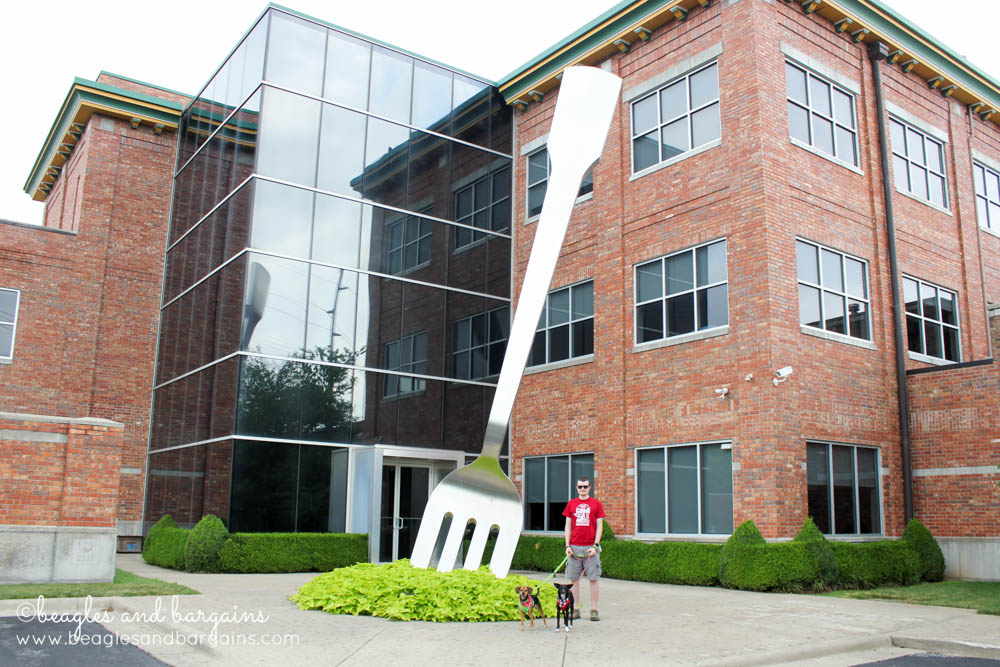 The next stop was the World’s Largest Gift Store in Phillipsburg, Missouri. Though Luna couldn’t go inside she was super excited to be out of the car and get a few treats for posing so well. 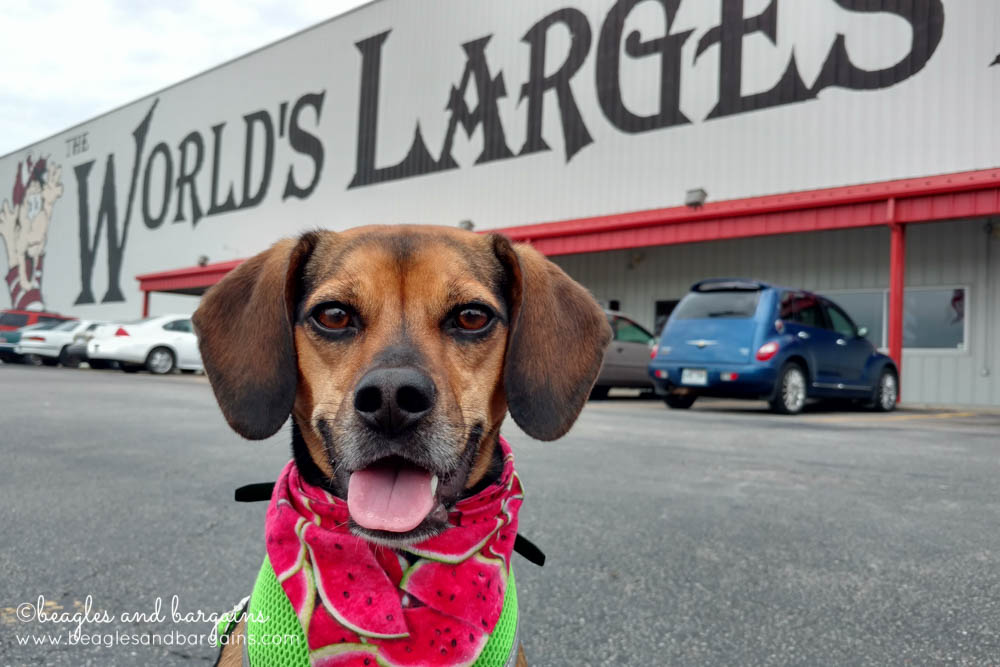 Then we headed to “Uranus” Missouri, which is pretty much a tourist trap with a fudge store and souvenier shop. But, come on it was called Uranus, so we decided to stop. 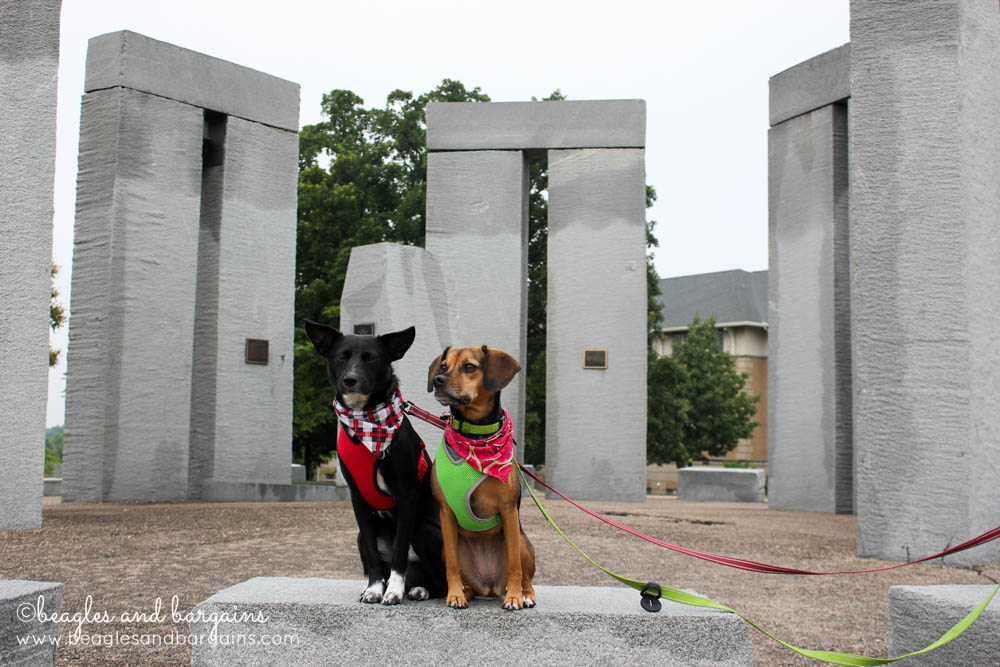 After that we kept on our way to Rolla, Missouri, which is home of Missouri University of Science and Technology (formerly University of Missouri–Rolla) where my parents went to college and met! We took a few pictures at their recreated Stonehenge, a place I remember from when I was younger. Then we headed to one of my parents’ favorite restaurants – Alex’s Pizza Palace – for a bit of lunch. We got two pizzas and of course some toasted ravioli! 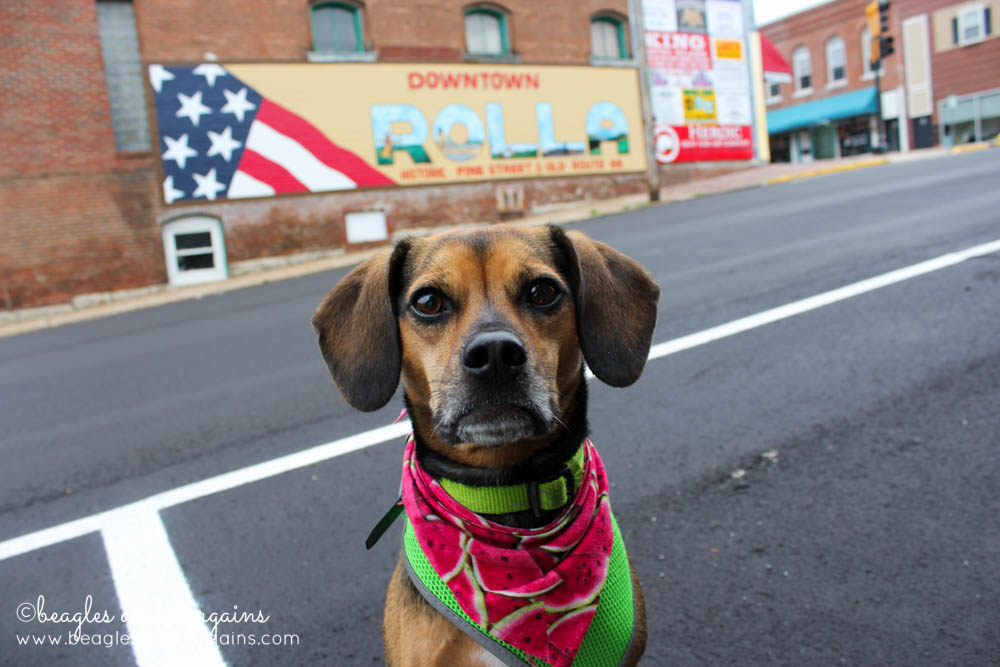 Then we made our way to St. Louis. Once there, we lucked into an awesome street parking spot, which was great because we wouldn’t have fit in most of the parking garages with our roof box on the car. It was about dusk, when we arrived so we had limited photo opportunities and a lot of the area around the St. Louis Arch was closed off. However, we were still able to walk with the dogs up to one of the entrances at the bottom. They couldn’t go inside, but a super nice employee let me sneak into the gift shop while my boyfriend stayed outside with the dogs. 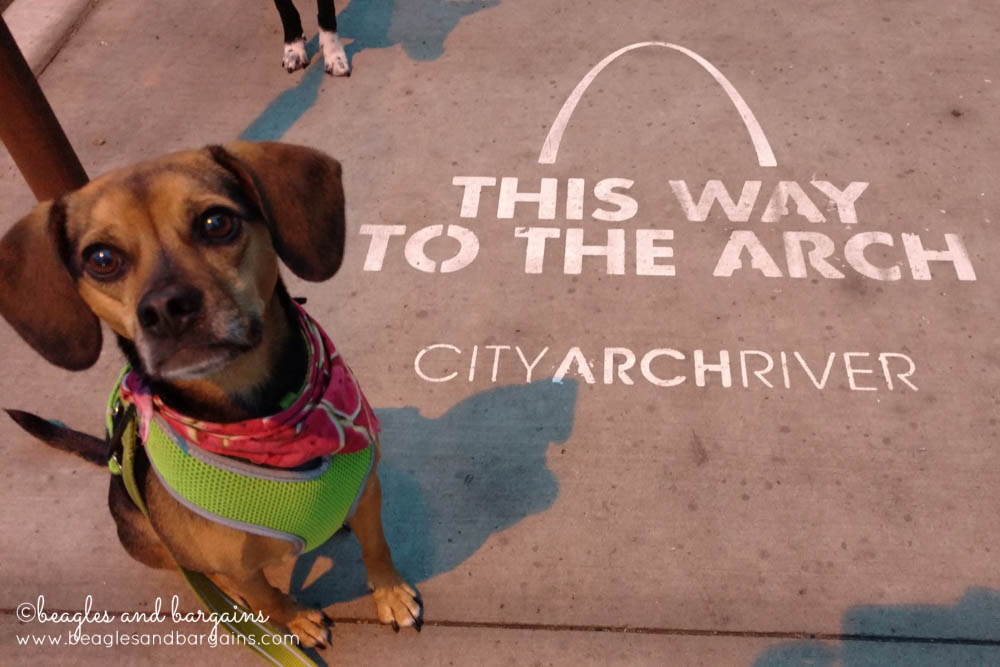 My boyfriend collects pins, so I was sure to get him one and we started adding bumper stickers to our roof box of all the places it has been, so I picked one of those up too! My grandmother collected thimbles and when she passed, I inherit some and have decided to keep the collection going. Unfortunately, they didn’t have any though. Maybe next time!

We had a great time in Missouri, but we didn’t stay there. We actually drove a few more hours to stay just south of Indianapolis to make our last day of driving a bit shorter.

On the final day of our whole trip, we left Indianapolis and took I-70 through the rest of Indiana, Ohio, a small sliver of West Virginia, and into Pennsylvania. Then we headed south down through Maryland and finally home to Virginia. 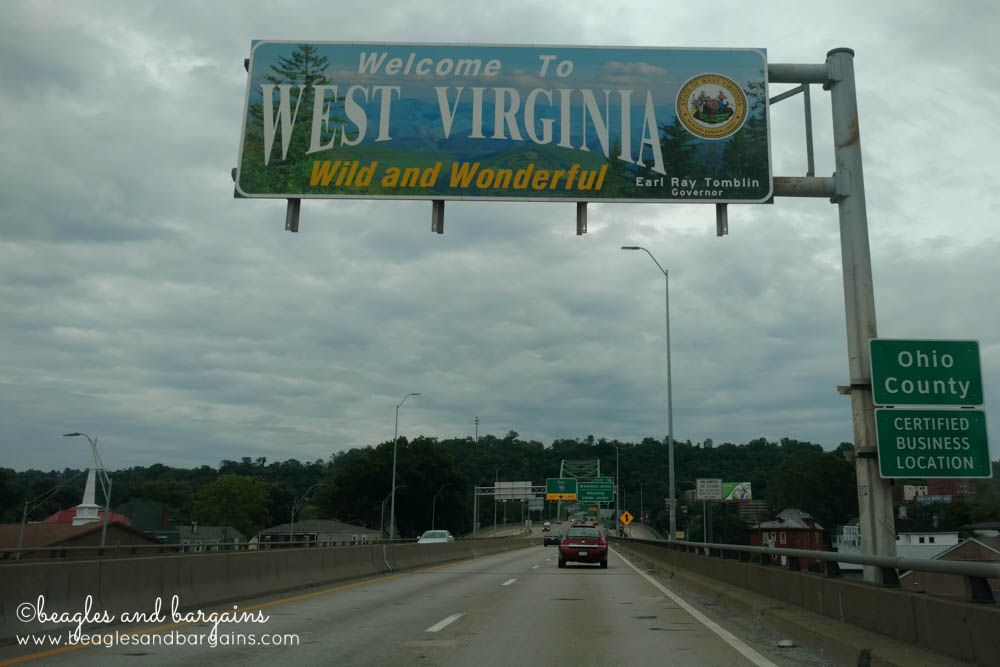 We couldn’t do that without stopping to see the World’s Largest Gavel near the Ohio Supreme Court Building in downtown Columbus. Plenty of photographs were taken and then we walked over to find a bench swing that overlooked the Scioto River and was surrounded by beautiful flowers. It was a super relaxing break spot for all four of us. 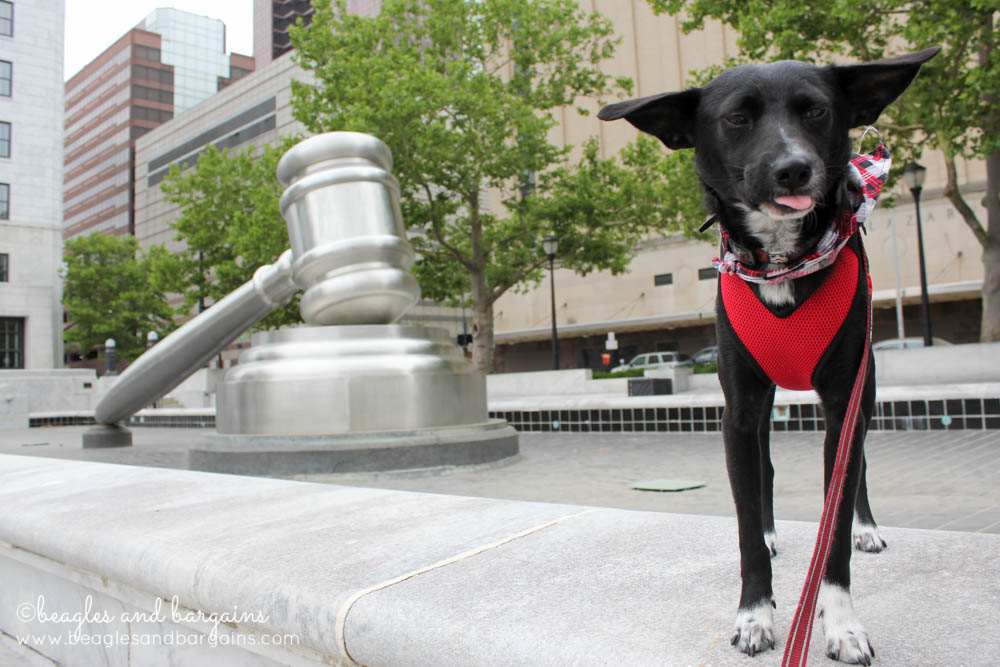 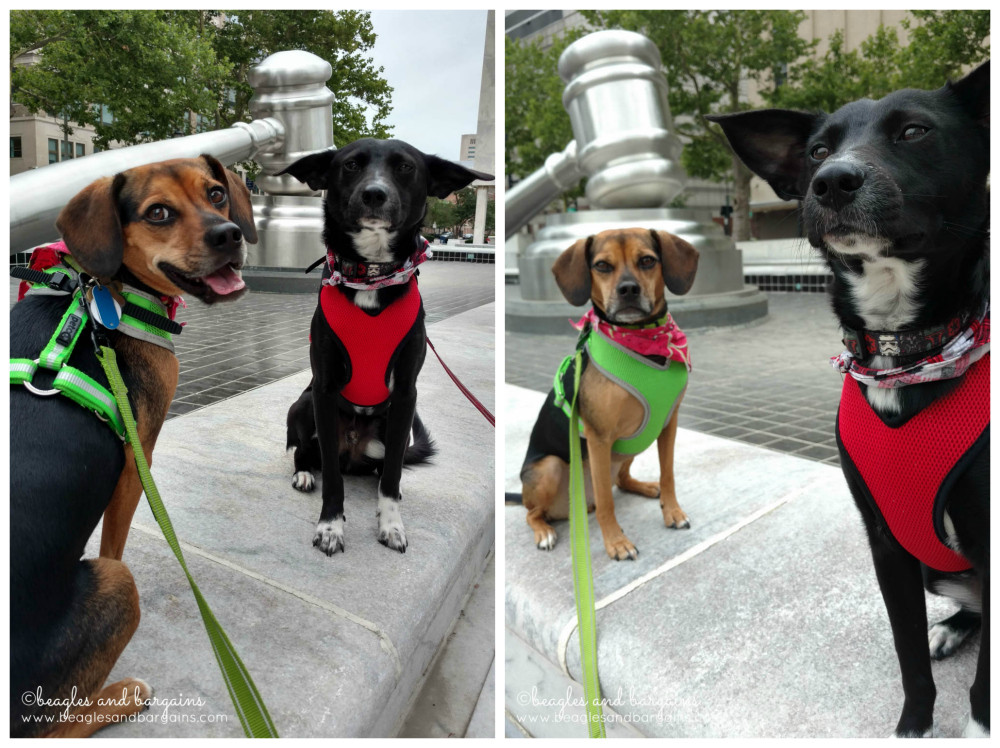 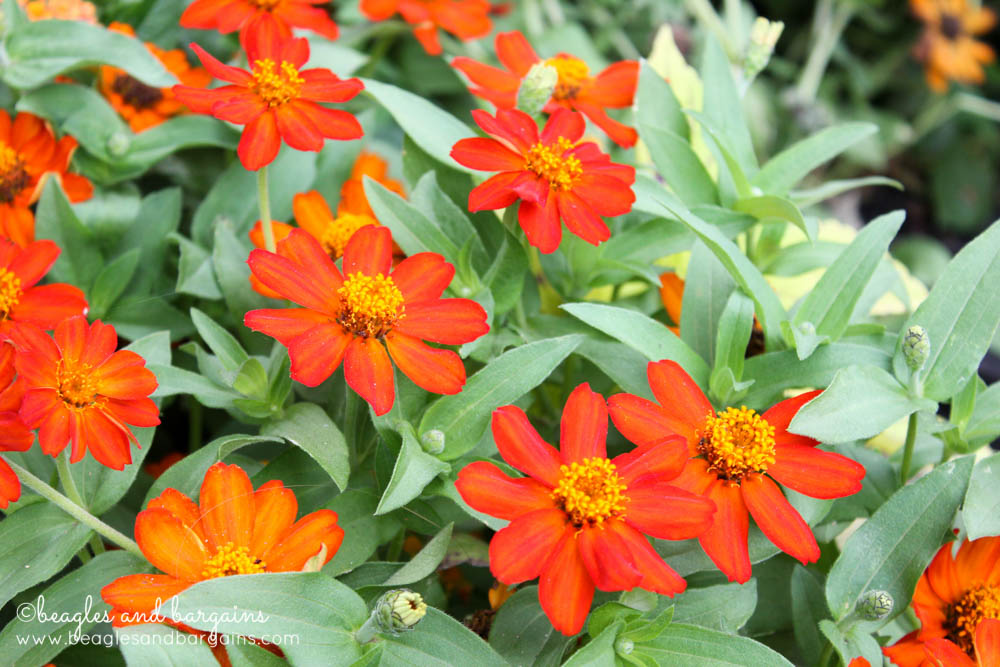 After that it was pretty much a straight drive home. Well, except for that amazing ice cream place we stopped called Kirke’s Homemade Ice Cream in Clairsville, Ohio where I promptly devoured a whole cone of “CatDog” flavored ice cream (cookies and cream meets cookie dough) complete with rainbow sprinkles. 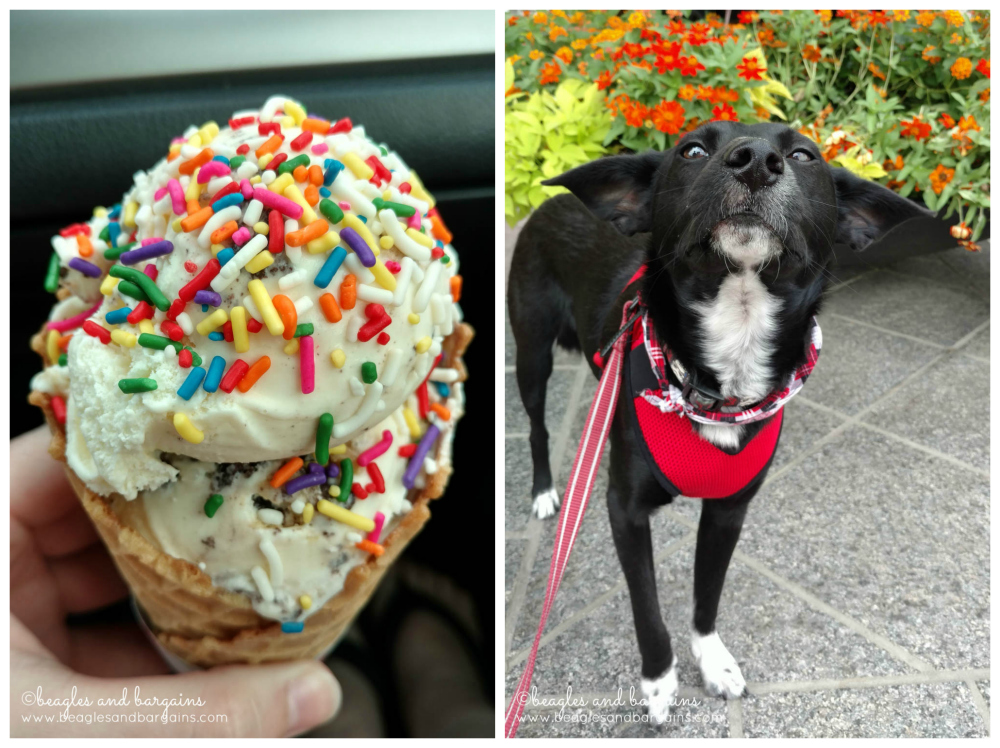 The dog’s and I (no boyfriend, alas!) will be heading on a smaller road trip this year to the BlogPaws Conference in Myrtle Beach, SC. I’m not sure when our next big trip will be but I hope it’s soon and would love to visit Colorado and some of the National Parks throughout the United States. 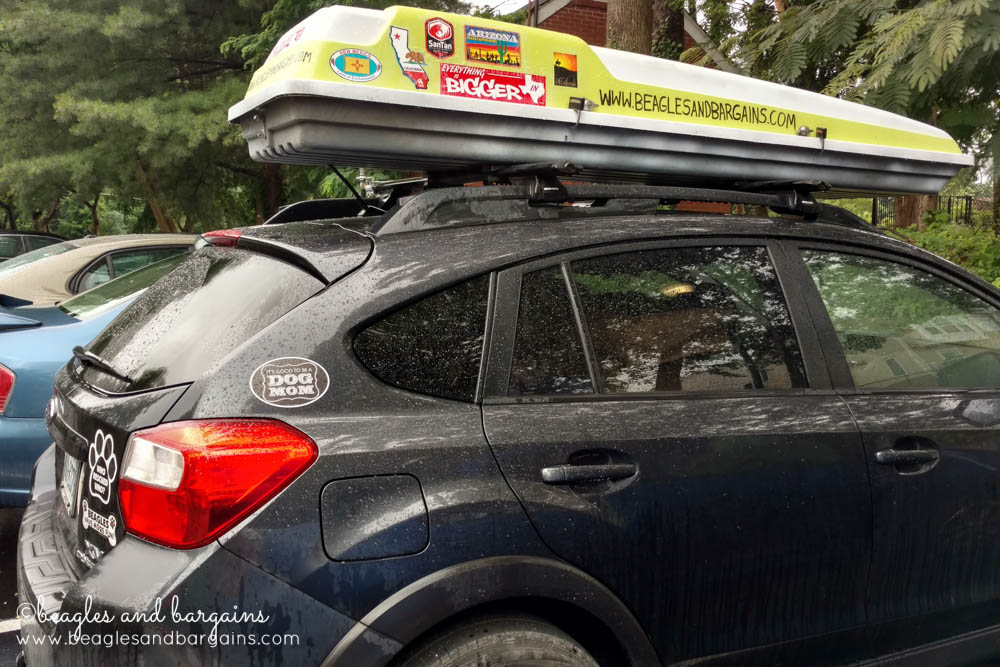 What is the biggest road trip you have taken with your pets?