It’s crazy to believe that before May of this year I had never been to California. My very first trip was extremely short and only because we briefly considered moving out that way. We ended up changing our minds and decided to stay in Northern Virginia, at least for the time being.

When we planned our road trip out to Phoenix for the BlogPaws Conference with the dogs, we thought why not continue all the way to California and make it a true coast to coast trip! My boyfriend’s parents had just moved out there earlier this year, so we had a place to stay and we really wanted to take the opportunity to bring the dogs since flying with both of them will probably never happen.

On our way out of Phoenix, we stopped at the SanTan Brewing Company because we were craving some beer and they happened to have a pet friendly patio. Since it was so hot, we were one of the few people sitting outside. It worked out well for us because the patio was covered and had misting fans, which kept things cool. Fewer people meant the dogs weren’t as distracted and that is always a win when you have ever hungry beagle. 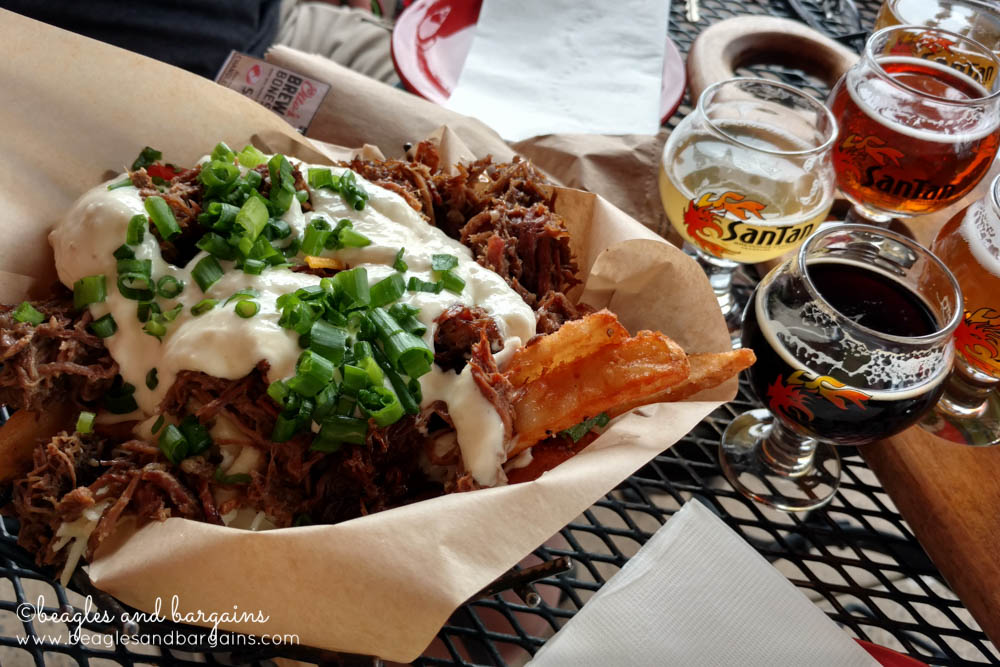 Boyfriend and I decided to get a flight of beers to share along with a few snacks. We picked the Brewer’s Fries and Jalapeño Chicken Caesar Salad. When the Brewer’s Fries came out, we were flabbergasted. It was a basket of ale battered fries smothered in braised short rib, horsy sauce, monterey jack cheese, and green onion THE SIZE OF YOUR FACE. By the time the salad arrived, we were both already in a food coma from all the deliciousness.

The pups weren’t left out either. They each got a small dog bowl of fresh water and a jumbo sized house baked peanut butter dog treat to share. 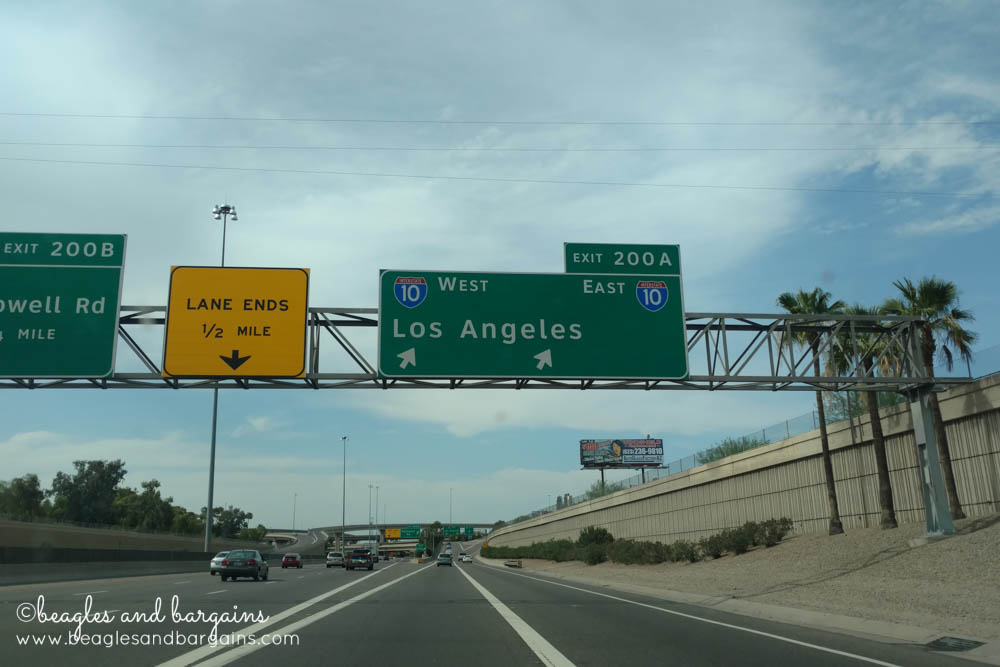 After we recovered from our food coma, we hit the road towards LA and drove pretty much straight there. We arrived late Sunday evening, but we still had plenty of time to catch up with family. 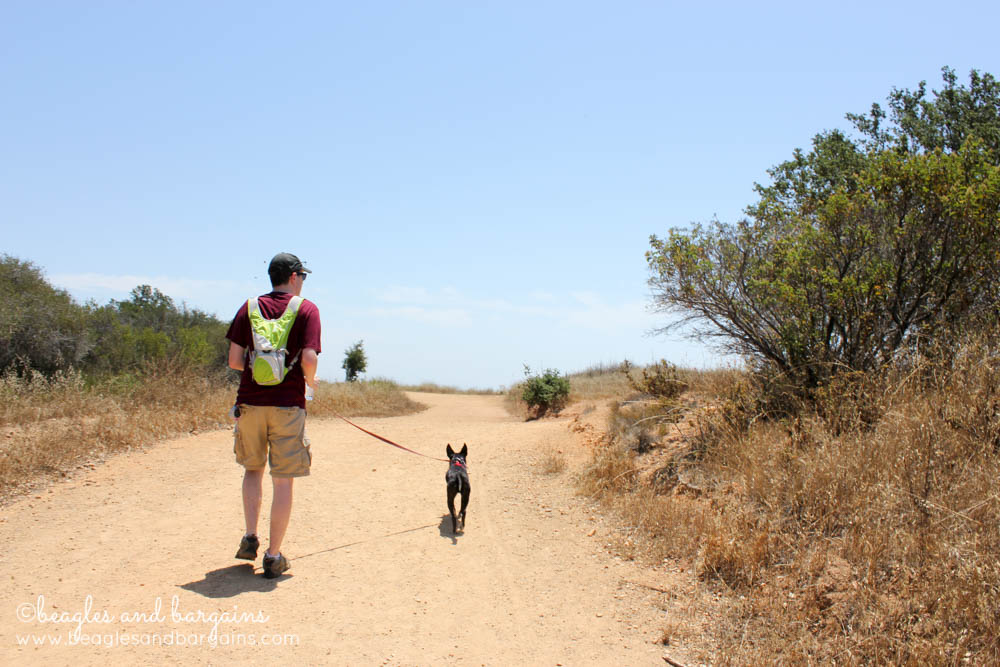 The next day we headed to Malibu to visit Tuna Canyon. I don’t know what it has to do with tuna (if anything), but it was fun to say “Luna Tuna in Tuna Canyon!” 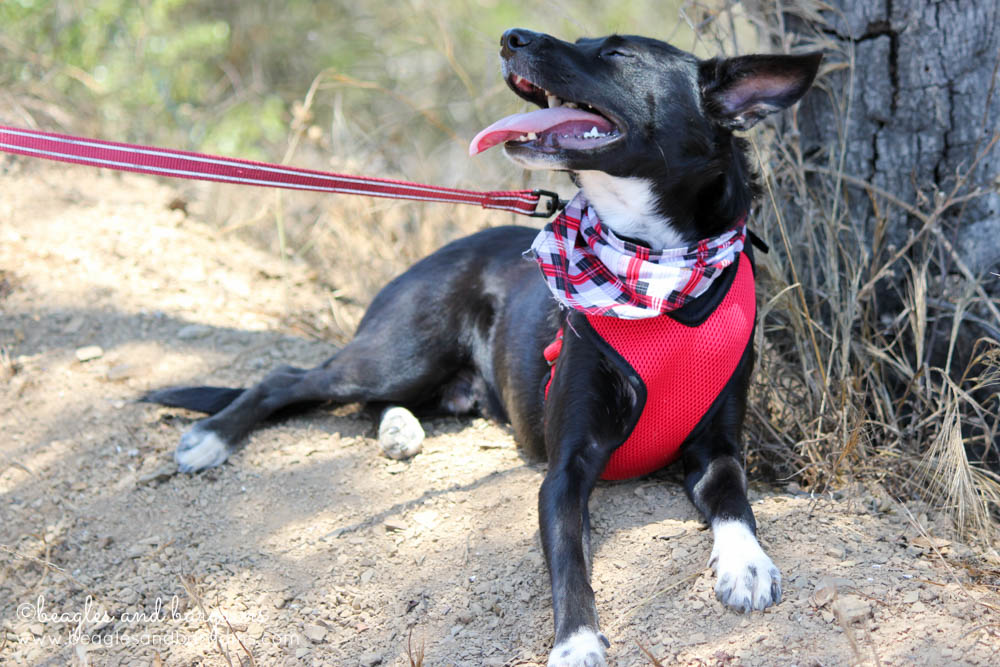 It wasn’t too long of a hike, but if you ask Ralph it was uphill both ways! It was mostly a bunch of dirt, but it did have some pretty cool foliage and trees. 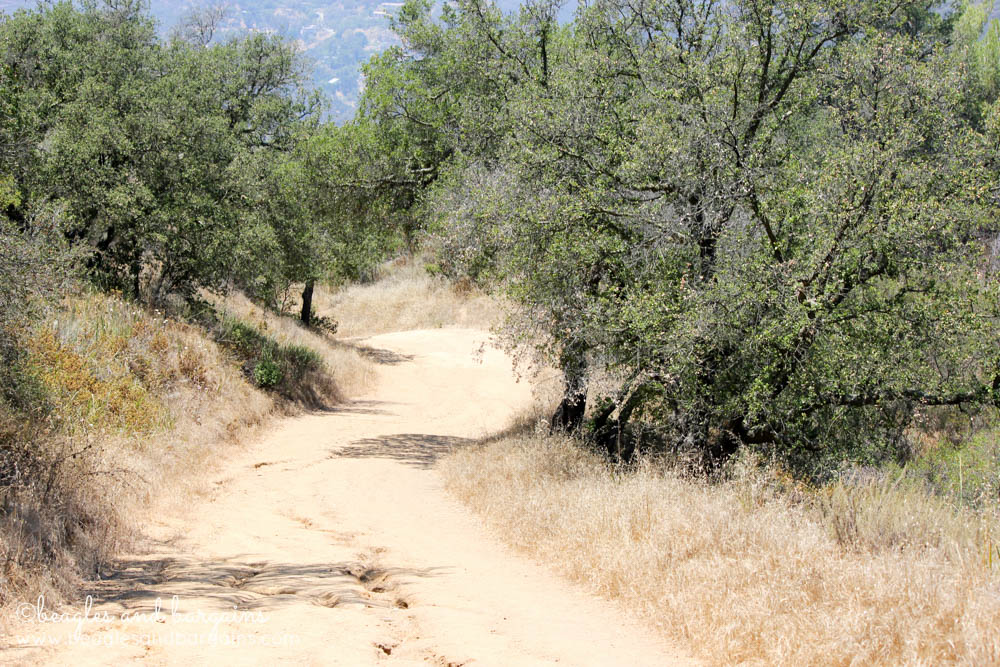 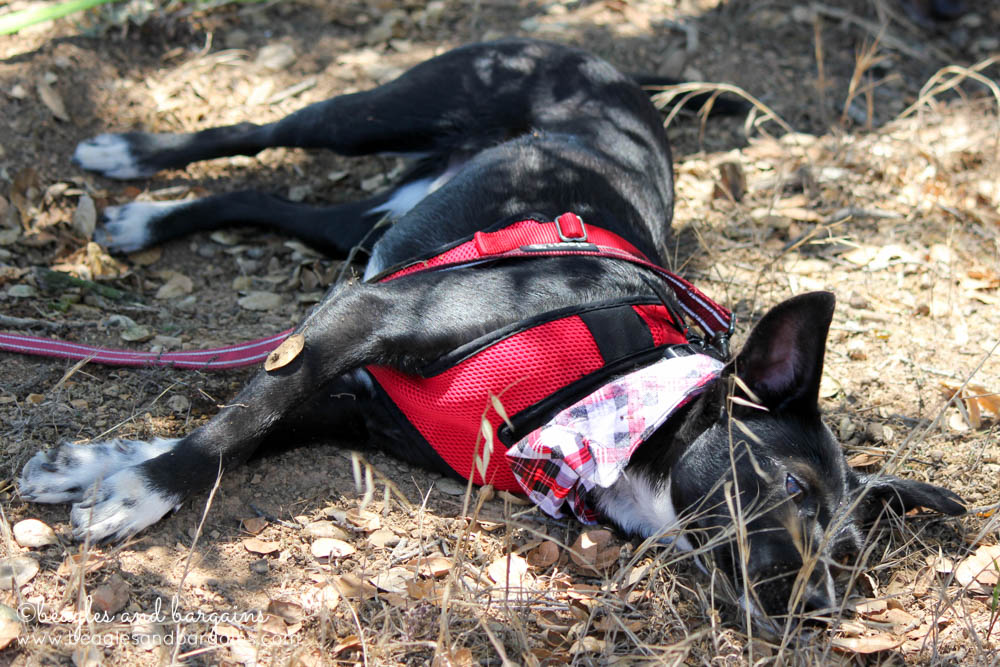 About half way up the hill, Ralph found a piece of shade and just sprawled out, tongue and all. I think that was his way of telling us he was a bit warm. We made sure to keep him hydrated and sprinkle some cool water on him to keep him cool. 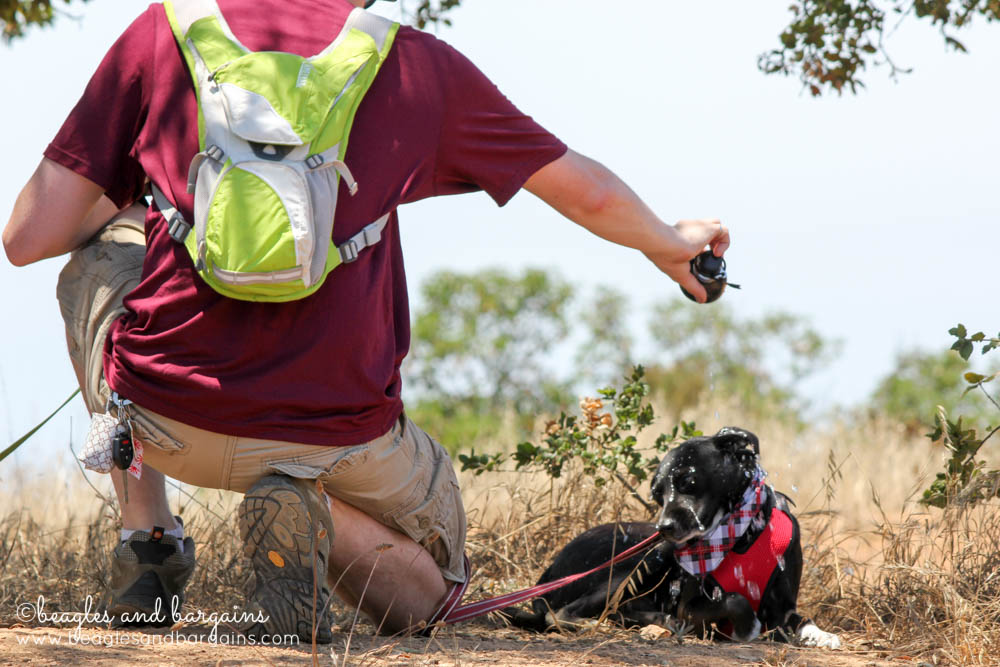 At the top there was this weird maze made out of rocks and broken pieces of cement. The day we went was a bit foggy, but typically there are some amazing views (or at least so I’m told)! 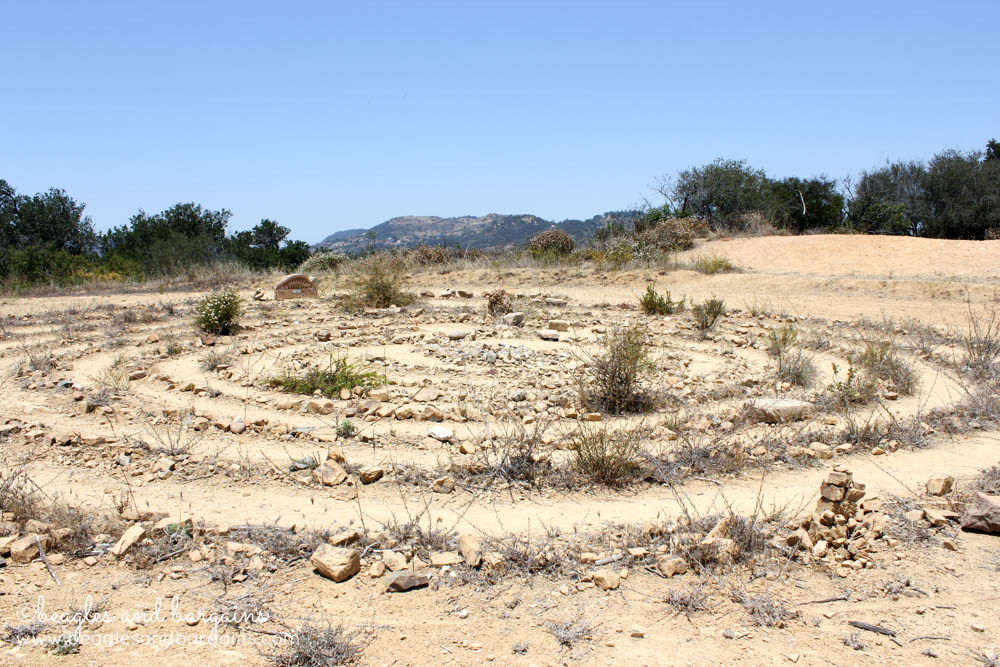 On the way back, Ralph found another spot of shade and it took a little bit more persuading to get him going again. You can’t blame him though. He’s never been on a hike before! Luna didn’t mind the bit of shade or rest break either. Once we told them we were heading back home, they were ready to go again. We eventually made it to the car, but not before stopping in every shading spot on the way down. 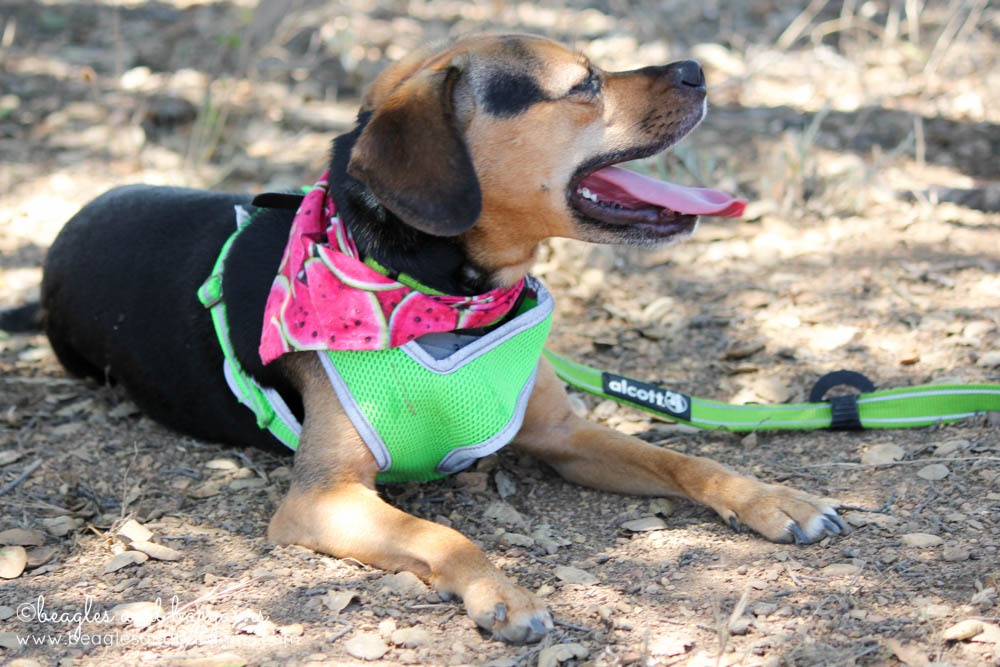 The next day we went on another adventure! This time we were headed to Huntington Dog Beach. When we were getting ready to go, both dogs were preparing for another long day in the car. To their surprise, we got out to walk around only about 30 minutes later.

First we stopped to get some brunch in downtown Huntington Beach. I was amazed how many people were walking around with their dogs! We selected to eat at Bruxie, where they make sandwiches with Belgian waffles! They had plenty of space on their patio for us hungry humans and our two dogs. 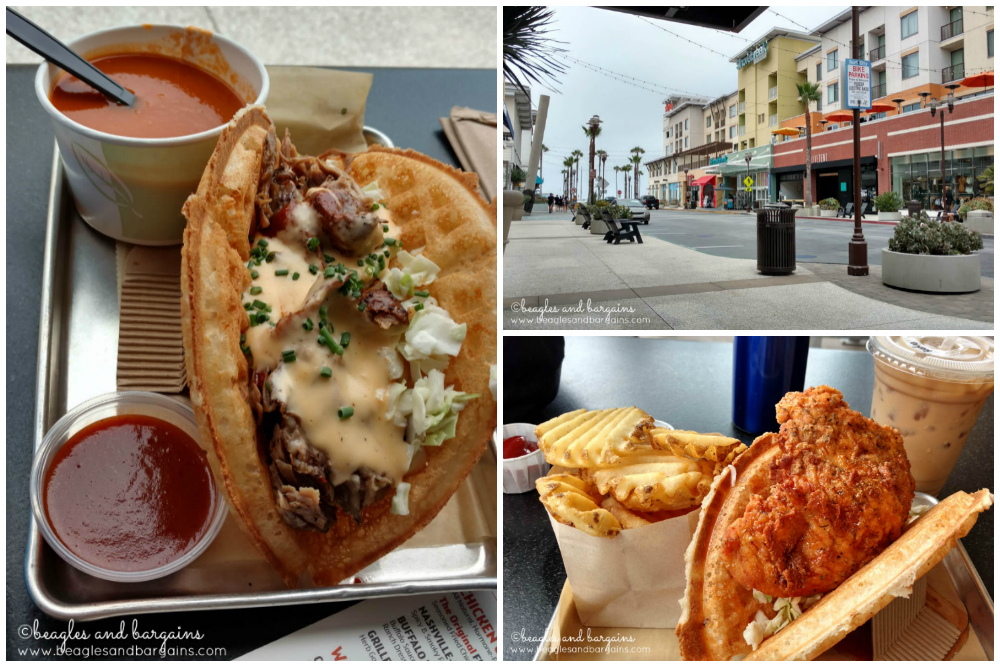 After we were full of chicken and waffles, we headed down to the section of the beach that allows dogs. We found a parking spot and then lugged all our beach things to the perfect spot in the sand. It was the Ralph’s first chance to try out his new Fun Fish Life Jacket from Outward Hound, so we suited up both the dogs! 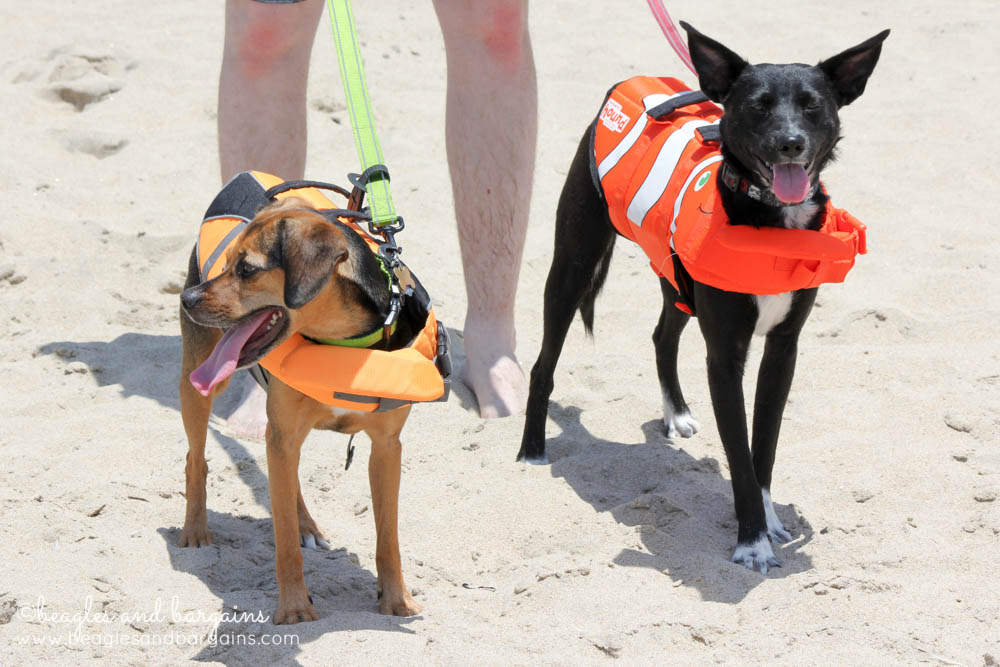 Once we felt like both dogs had acclimated, we let them go off leash. Since Luna can let her nose get the best of her and we had never allowed Ralph to be off leash before, we kept a very close eye on them both. To our surprise Ralph never strayed far away. After he got his fair share of time in the ocean, he would go back to lay on our beach towels and watch us! 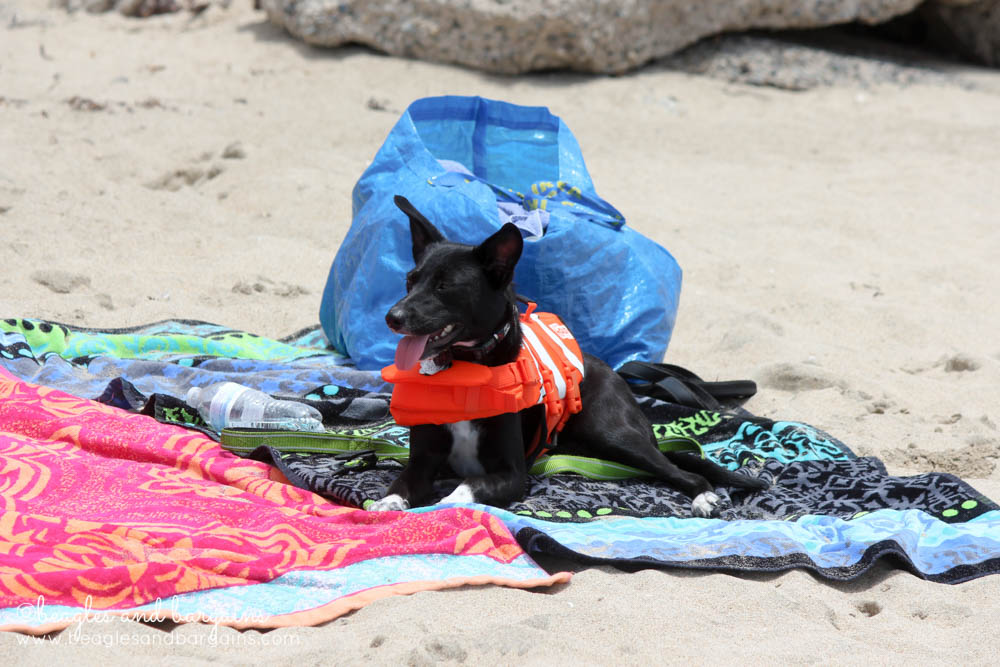 Neither Ralph or Luna were very interested in the water. They were curious at first, but were frightened a bit when the larger waves crashed in. Luna enjoyed her time in the sun racing up and down beach trying to get other dogs to chase her and digging large holes. Ralph spent a lot of time sun bathing and finally had the opportunity to play fetch with his new Chuckit, which he got after our tour of PetSmart’s Home Office. 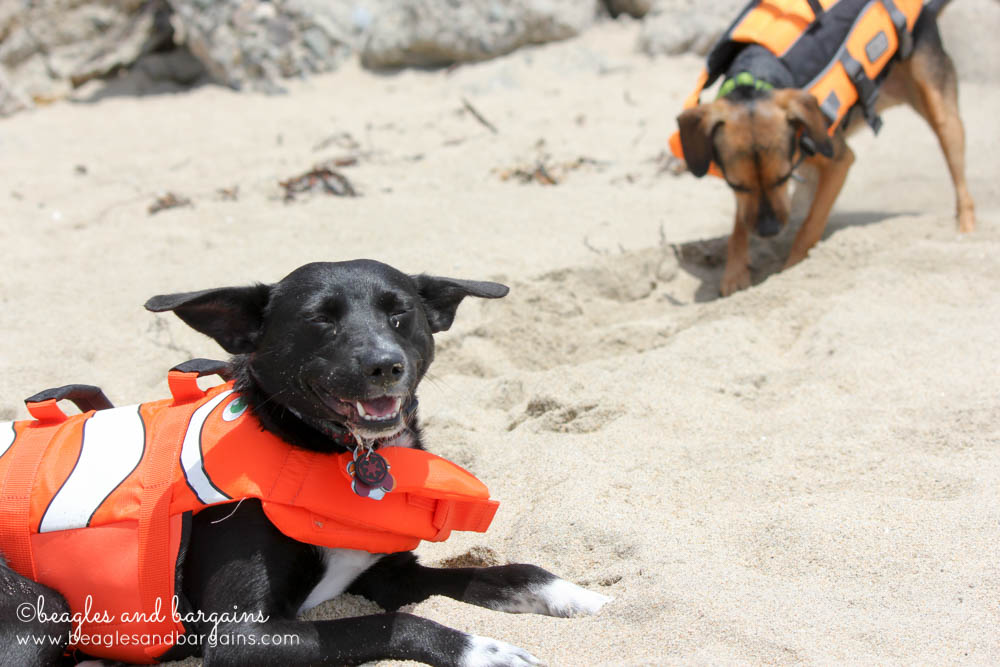 After our day in the sun, we headed back and the pups were promptly put into the shower. No one needs the smell of wet dog or a bunch of loose sand snuggled up to them when their trying to get a good night’s sleep! 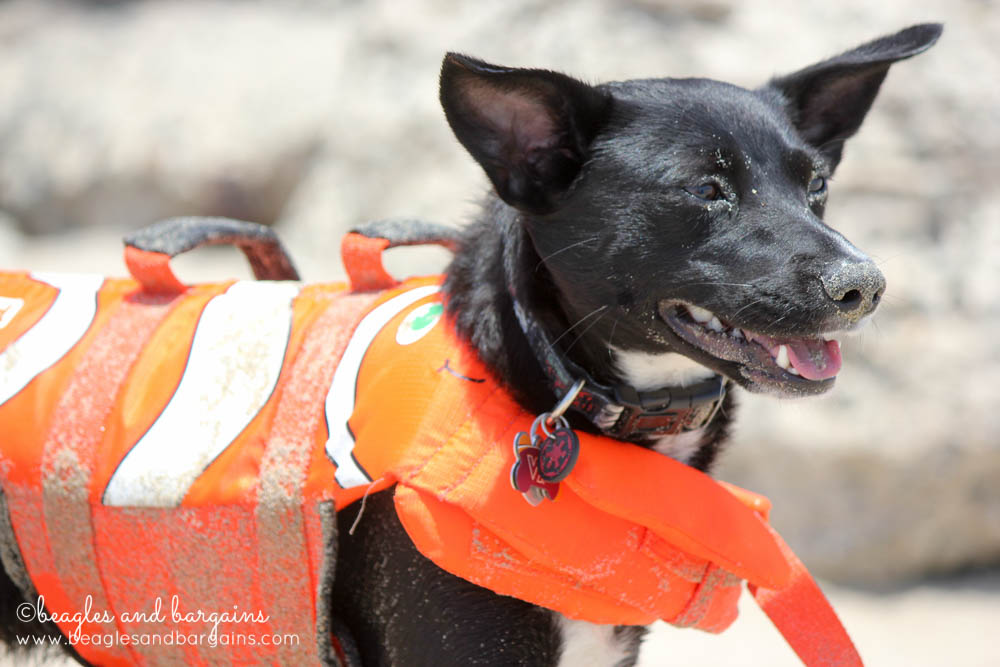 We had one more day in Los Angeles before we headed back east, so my boyfriend and I headed down to the Hollywood Walk of Fame and other touristy attractions. Both pups stayed back at the house for the few hours we were out, but they made new friends when they got to meet my boyfriend’s aunt and uncle who were in town all the way from Scotland. 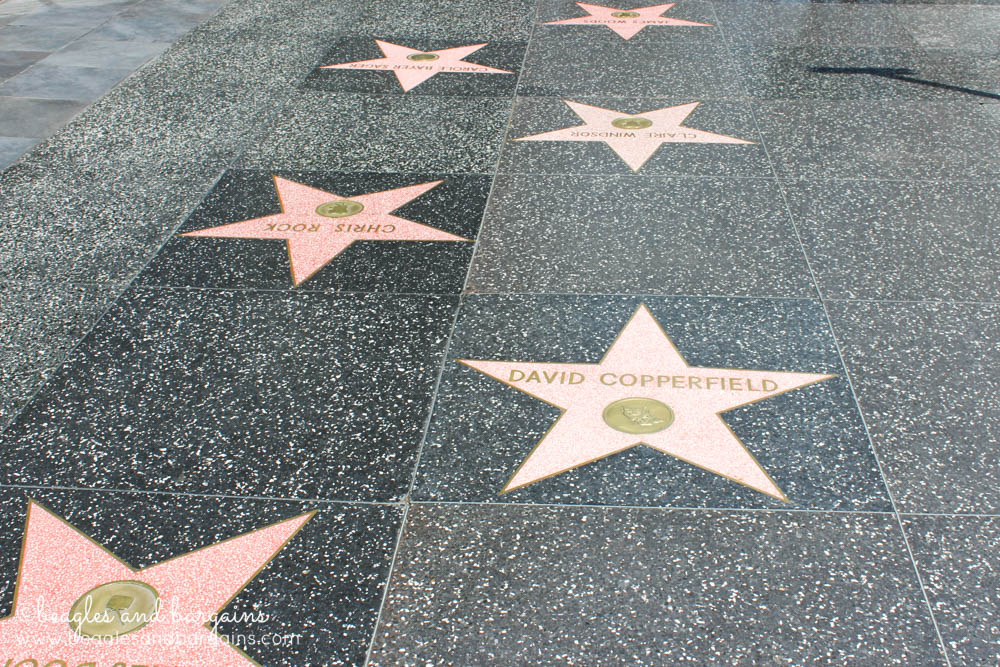 We had a great time during our stay in California. The weather was wonderful. Ralph even got to shop at his own store – Ralphs! I asked him why he didn’t open up any locations on the East Coast, but he just shrugged. 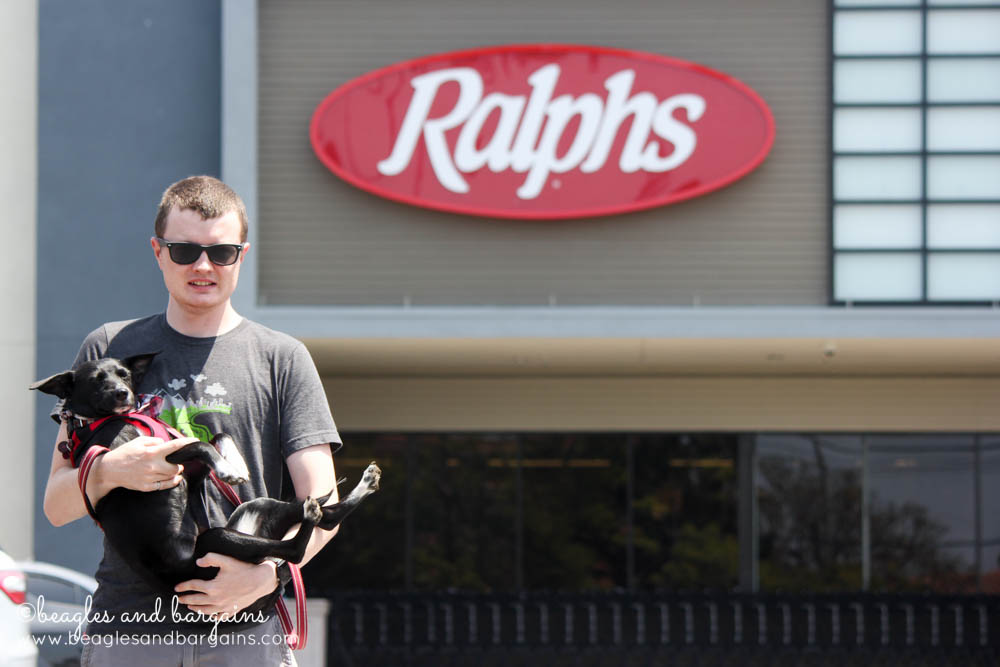 I was always told that LA wasn’t very green. The plant life, while not as green and lush as back home, is pretty unique! Plus, it has the sand and ocean. It was so much fun to spend a day at the beach with the dogs. And of course, it’s always great to see family. 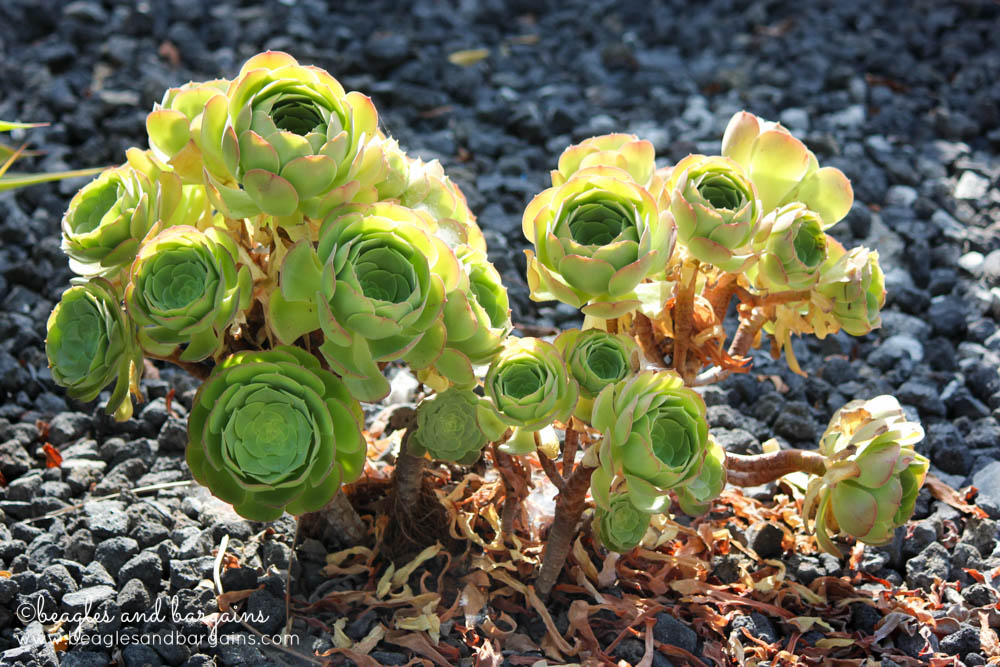 Stay tuned for the final chapter of our trip across the country and back!

Has your dog ever seen the ocean?