FitDog Friday: A Day in the Park Black and White Sunday: Sleepy Day

Feature Friday: Help Save a Bull 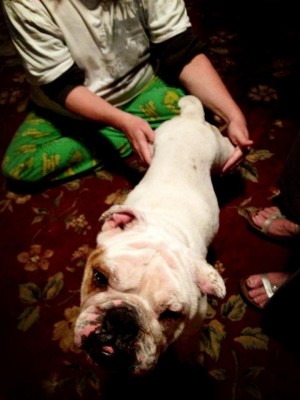 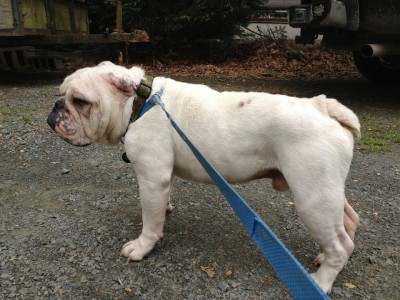 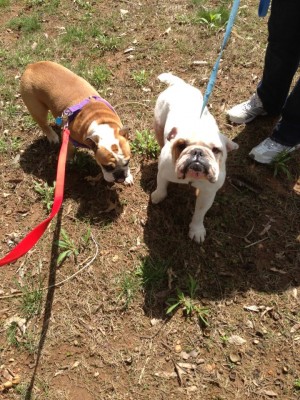 As you may know, I am a huge supporter of animal rescue and pet adoption. Earlier this week, I was doing my normal Facebook stalking when I came across a post that a friend of mine shared. She had posted a link to a Fundly page which shared the story of a Bulldog who so far has not had the best life, but has now been brought into a loving home and is on his way to becoming healthy. The best part was that this loving home was not just with some person out there on the internet, but it was someone who lived locally and I knew through my boyfriend and his friends. I was so proud, thrilled, excited, happy, and just overall emotional that I immediately replied on the post to get more information and to offer to share the story.

The Bulldog featured on the Fundly page is named Leroy Jackson. His story starts when he was surrendered to a veterinarian’s office because the family could no longer care for him. Instead of sending Jackson to a kill shelter, an employee of the veterinarian’s office saved Jackson to be the companion for a beloved man named Leroy (Jackson’s namesake). Unfortunately, Leroy passed away not long after Jackson was saved. After Leroy’s passing, Jackson once again had to find a new home. He found one with a former neighbor of Leroy. After some time, Jackson’s new owner had to move and although he did return to feed and care for Jackson, he had to temporarily leave him behind. Then the situation worsened when financial stress and other personal issues prevented the owner from returning.

When Lauren Cole and her family heard about Jackson, they immediately went over to see how he was. Shocked at the state he was in, Lauren took Jackson home. As a neighbor of Jackson’s current owner, she contacted him asking for permission to take over Jackson’s care. He very willingly agreed and was happy that Jackson had found a better home.

The day after Lauren brought Jackson home, she took him to the vet. In his worst state, Jackson was covered in ticks, dirty, and had very long nails. He was nearly 20 pounds underweight. Jackson has cauliflower ear, ear infections, a cyst in his eye, terrible skin rashes and infections, and Lyme disease. His rear legs are weak and it is unclear if the weakness was caused by him being underweight or if it is a hip disorder. Jackson is now clean and tick free, but tests are still being done. Lauren wants to make sure she does not miss anything. She has already spent $700 and it could be more, which is why Lauren started her Fundly page.

Jackson is currently taking five medications and is working to get back to his normal weight. Jackson has been introduced to the other dogs in Lauren’s family: a Golden Retriever, a German Shepherd, and another Bulldog. They all get along great. According to Lauren, he is happy and has the kindest spirit. He will put a smile on everyone’s face. Her and her family are thrilled to add him to their pack.

For more information about Leroy Jackson, become a supporter on his Fundly page. If you can donate, both Jackson and Lauren would greatly appreciate it. If enough donations are collected to cover Jackson’s care, the remaining funds will be donated to the Adopt-a-Bull Rescue in Florida. If you cannot donate, please consider taking the time to share Lauren and Jackson’s amazing story or even offer any advice you may have for raising a dog in need. To me, Lauren and Jackson are role models. I cannot wait to see what the future holds for them.